Kalgoorlie was the stop that we were prepared to take or leave when we were in the planning phase of our trip. If we made it there, all well and good but if it didn’t happen, then that was ok too. On our trip across the  Nullarbor we realised that we hadn’t made plans for Easter and needed to work out accommodation options STAT! We narrowed down our choice between Esperance and Kalgoorlie and given our lack of planning, we figured that Kalgoorlie was the lesser of desirable tourist destinations over a long weekend and Esperance would most likely be teaming with tourists. So our decision was made – we’d be spending the Easter break in Kalgoorlie.

After a quick ring around, we managed to nab a spot at the Discovery Park Kalgoorlie, and whilst a few dollars more than some of the other van parks, it proved to be worth every cent thanks to a school holiday program including Easter egg basket making and an Easter egg hunt for the kids, as well as a couple of social BBQ gatherings for the adults.

Arriving just before lunch, we settled into camp, before heading up to the Super Pit to check out the ‘blast’ at 2pm. Every few days or so, the Super Pit (open cut gold mine) schedules a blasting of explosives to loosen the earth. The Super Pit lookout is a great vantage point for getting an idea of the sheer size and scale of one of the biggest gold mines in Australia.

With around 50 or so others, we stood at the lookout waiting in anticipation for the explosion, when suddenly we noticed a small puff of smoke at the base of the pit floating upwards. Was that it? We weren’t the only one left wondering and waiting for a bigger explosion to come.  But as it turns out, yes was it! 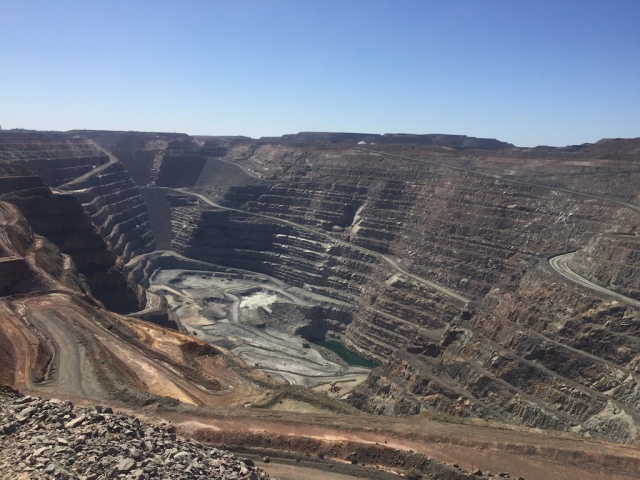 I even went back to check the pictures I’d taken before the blast to compare with the ones after and there is barely any difference between the two pics above.

My afternoon was spent catching up on laundry and pottering around, whilst Corey took the girls to the freezing cold pool for a swim. 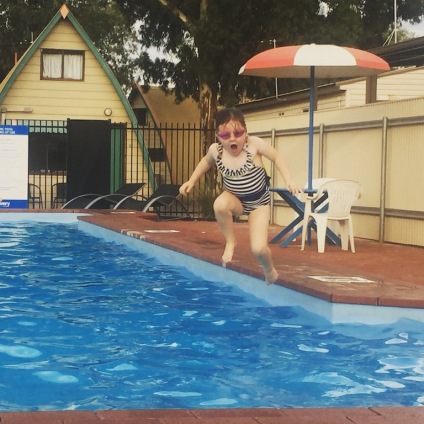 The next day was Good Friday, a day that I would normally be up at 5am and getting ready for the Mildura Easter Powersports Show & Shine event which I’d been doing the past six years, but this year, we headed to Lake Ballard instead. Located approximately 140km from Kalgoorlie, we’d been told about Lake Ballard by Natasha & Ritchie whom we’d met in Bundaberg last year. Lake Ballard is a large salt lake which in itself is not awe-inspiring, however the cast iron statues that are peppered around the lake, representing the townsfolk who live in the nearby town of Menzies is what makes it an interesting experience.

The girls had a fabulous time walking through salty mud to check out each statue, proudly declaring whether or not the statue was a boy or a girl as we got near!

A steep hill in the middle of the salt flats, with a little goat track up the side gave us an aerial view of the lake and it’s steel inhabitants. 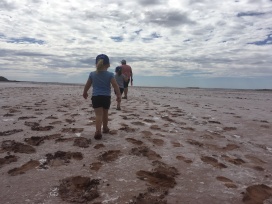 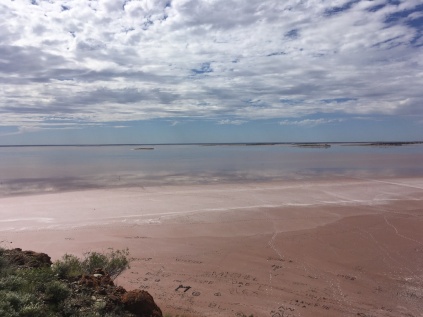 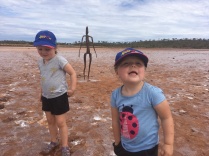 After lunch, it was time to head back to camp and when we arrived the girls hit the pool again. It’s funny how little kids do not notice the freezing temperature of swimming pools!

Saturday was spent closer to home, with the girls participating in the kids club and making their Easter baskets. 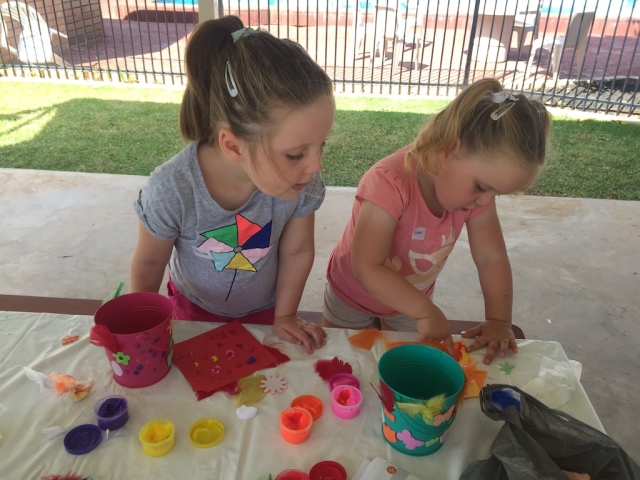 The afternoon was spent dealing with a meltdown by Miss B, much to the amusement of our elderly neighbours. After an hour and a half of pleading, cajoling, negotiating and straight up yelling, she was still carrying on so as a last resort the threat of no Easter Bunny was dished out. And ignored, so as a consequence, the girls woke up on Sunday morning to a note from a very disappointed bunny, and a tiny little mini egg in their baskets. Yes, I am *that* mother.

But turns out there’s no tricking Miss B who after being read the note from the Easter Bunny, looked me square in the eye and asked, “Did you write that, Mum?” #busted

After assuring her that I didn’t, and when offered a chance at redemption, Miss B was as good as gold in the lead up to the Easter egg hunt and both girls had an awesome time playing with other children and hunting for straws which ultimately morphed into eggs. Miss B even found the ‘golden egg’, which resulted in her winning a Lindt chocolate bunny! 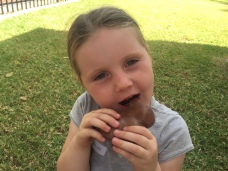 In addition to their haul during the hunt, our lovely neighbours Wal and Joan gave the girls some small bunny eggs and a book for Easter which was very sweet. For two girls who didn’t get anything from the Easter Bunny, they ended up with quite a stash (edit: which Corey subsequently enjoyed). 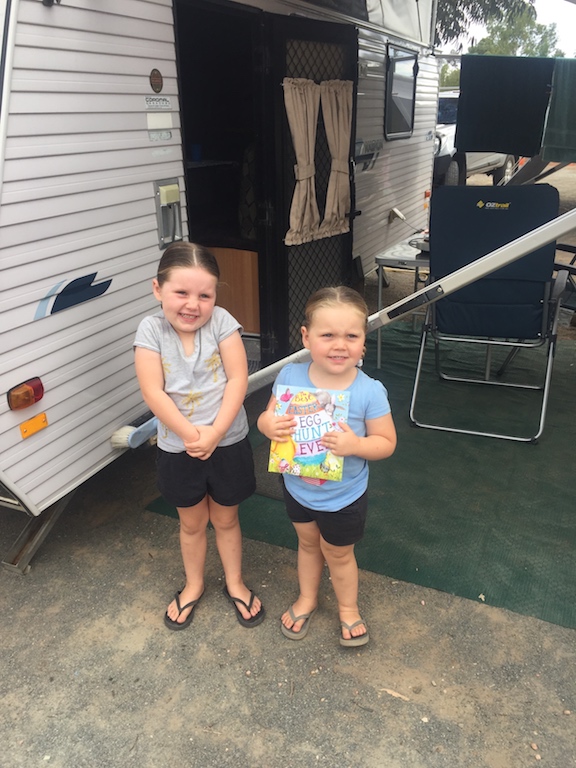 That afternoon, we headed out to the historic Hannan Gold Mine, which was the original mine gazetted by the Irishman who first staked his claim in Kalgoorlie and ultimately was responsible for the rush that would soon follow. 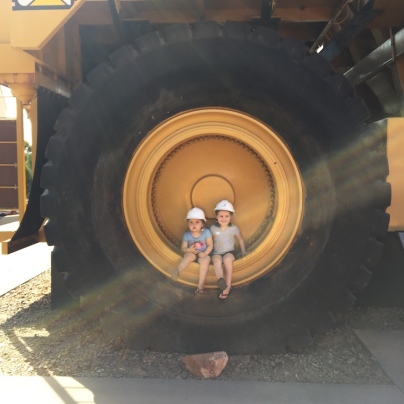 Kalgoorlie is a town with a fascinating history and we were really surprised at how much we enjoyed it. The gold mining history is prolific and Corey even spent an hour or so checking out one of the Historic Burt Street pubs (the Metropole in Boulder), where they actually had a shaft into a mine below so that miners back in the day could come up on their lunch breaks for a beer because back then beer was cheaper than water!

Kalgoorlie also allowed us to meet some fabulous people at our caravan park. The girls really took to Wal and Joan, the older couple from NSW who were parked behind us and were often popping over next door to say hi! One night Asher even climbed up in bed next to Joan to watch TV!! We also met an awesome family who had moved to WA from QLD the year prior and now spent their weekends and holidays exploring their new state. 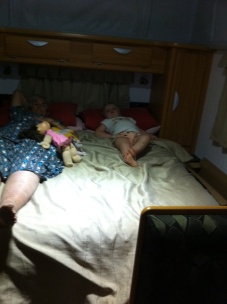 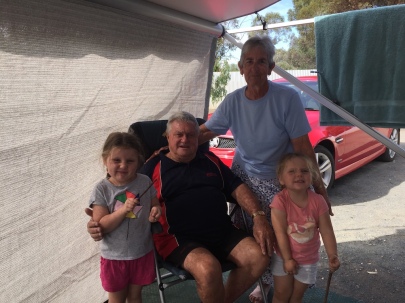 Kalgoorlie is also where I also spent considerable time trying to sort out my phone storage issues thanks to nearly 12,000 photos taking up all the space and so each evening after the girls were in bed, I headed to McDonalds to use their wifi to try and upload them to Google pictures – unfortunately it was slow going, only uploading 3000 photos over 3 days as my phone just had no space to allow the upload to work properly. I managed to figure out a work around and downloaded them to my computer, which then resulted in my laptop storage maxing out! Next stop, Officeworks to get a new data hard drive (I have one, but long story short it has a heap of movies and TV shows on it and the way it has been formatted means it won’t accept the photo files so I’ll need to get a new drive, transfer the movies, clear the old drive and reformat and hopefully move all the pics off my laptop and onto my old drive!)

All in all, we had a fabulous time in Kalgoorlie and for families there is a heap to do. The mine tour is apparently very interesting, but for little kids, we’d been told it was a little too much. Still, the seeing the Super Pit and the equipment at the Hannan’s mine was interesting enough!

And like that, the Easter break was over and our time in Kalgoorlie was over – time to head for Esperance and Cape Le Grand!

What did you get up to this Easter? Have you ever been to a place that was unexpectedly better than you anticipated?

One thought on “Gold sparkles in Kalgoorlie”