Ok, so I’ll put this out there up front. We’ve got a new contender in our top 3 favourite places! Prior to arriving at Cape le Grand, our top three consisted of:

I haven’t quite figured out whether Minnie Water or Flinders Ranges has dropped off, but for mine, Bay of Fires and Cape le Grand are vying for 1 and 2!

After our Easter break in Kalgoorlie, we arrived in Esperance, hoping to do some grocery shopping after we discovered that the supermarkets in Kalgoorlie were shut for Easter Monday. Turns out, closures over Easter Monday must be the norm in WA as they weren’t open in Esperance either. So we decided that we’d stay at a caravan park for the night in town and sort out the groceries first thing in the morning (as it’s highly recommended to get to Cape le Grand early to get a spot in the campground!)

We arrived at Lucky Bay campground around 11am, which proved to be the perfect time as those leaving after Easter weekend had left and we had a great choice of sites. We ended up picking site number 12 and even the Caretaker commented that we had gotten the best site at the campground! Lucky us!

Situated within the Cape le Grand National Park, Lucky Bay is one of two campgrounds in the park and at $20 a night ($10 per person – children under 5 are free) there are flushing toilets and solar powered showers. I have to say, WA do a fabulous job in the layout and amenities within their campgrounds and Lucky Bay was better than some of the caravan parks we’ve stayed at!

So after we’d set up, we headed down the beach and met some of the locals!

We ended up spending three nights here which gave us enough time to explore the Lucky Bay area. We decided to head up to Frenchman’s Peak, a lookout on top of a large rock formation, which was incredibly steep but we weren’t sure if the girls would get up it. There, we met the same family we’d met at Kalgoorlie who were camped at the Le Grand campground down the road. We ended up heading back to their camp for a few drinks. Unfortunately their beach was closed due to the shark attack that had happened the day before, just around the bay from their campground, but it was good to check out that area and have a few drinks.

The next day we decided that given the Frenchman’s Peak was a no-go for use, we would climb up the rocks at Lucky Bay with the girls instead. 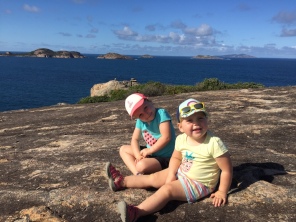 And were rewarded with an amazing view!

In the afternoon, the girls were playing outside when Miss A yelled out ‘Kangaroo, Mum!”  I thought she was talking about the toy plastic kangaroo, until I looked over and saw this:

This furry fellow decided to check out our campsite and was quite curious about the  ekindy stuff I’d been catching up on. Ironically, he found the toy plastic kangaroo too! 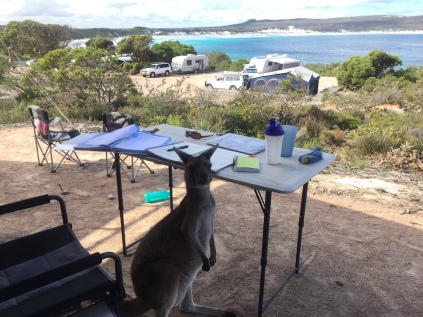 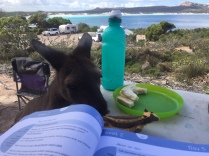 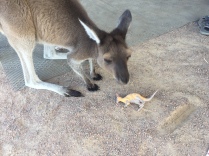 I couldn’t resist getting up early each morning, and walking the couple of kms from Lucky Bay, over to Thistle Cove beach which was an awesome way to start the day.

The day was spent on the beach with a coffee from the coffee van and of course, we couldn’t leave without doing a spot of fishing!  We headed down the beach so Corey could fish and the girls could play in the sand. Before long we were joined by our new friends Bill and Belinda and their three kids so as the boys fished and the kids played, Belinda and I sat back and chatted. 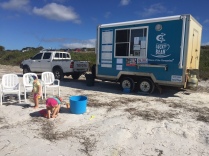 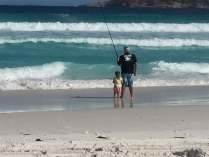 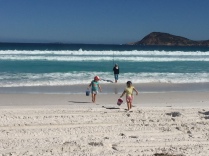 After catching a couple of trevally, the boys decided to try their luck at the nearby Hellfire beach. The kids had a great time and a few more fish were caught, including this fish, which we couldn’t really identify but thought could be a parrot fish (edit: we’ve since found out that it is a knife jaw).

By that stage, night had fallen and it was time to head home. Cheese toasties for dinner and the girls into bed and our day was done. We’d made ourselves some great new friends and hopefully we will see them again when we get to Perth after they extended an invite to park our van at their place whilst we were in town.

Have you ever seen Kangaroos on a beach before? Do you rank the most favourite places you’ve visited?