The Nullarbor Plain, the holy grail of the big lap, a pilgrimage of nothingness that people either love or hate. We were never planning to do the Nullarbor slowly. Corey and I tend to subscribe to the ripping the bandaid approach on roadtrips – no mucking about, no extended breaks, just keep moving.

But the Nullarbor is a very very long way so despite this approach, we did get to see some awesome parts of it and take in the vast expanse of nothingness that it represents.

After leaving Penong and stopping in at the Head of the Bight where the sandy dunes meets the Bunda Cliffs, we were well and truly on our way across the Nullarbor Plain.

The Nullarbor, in essence means no trees (Latin – Nullus = no and Arbor = trees) and for the most part, no trees is exactly what you get.

We did stop off to view some of the tourist spots such as one of the lookouts to view another angle of the Bunda Cliffs.

Pretty impressive right?? These views were actually mind blowing. Especially when you have a very clear view of the map in your mind’s eye and seeing them in 3D like this is really surreal. And breathtakingly beautiful in a rugged, craggy kind of way!

We travelled a little further down the road and ended up spending the night, right on the Bight – with a view like this out of my window as I made dinner (and used the last of our veggies before we hit Eucla and the fruit fly inspection checkpoint!!!) 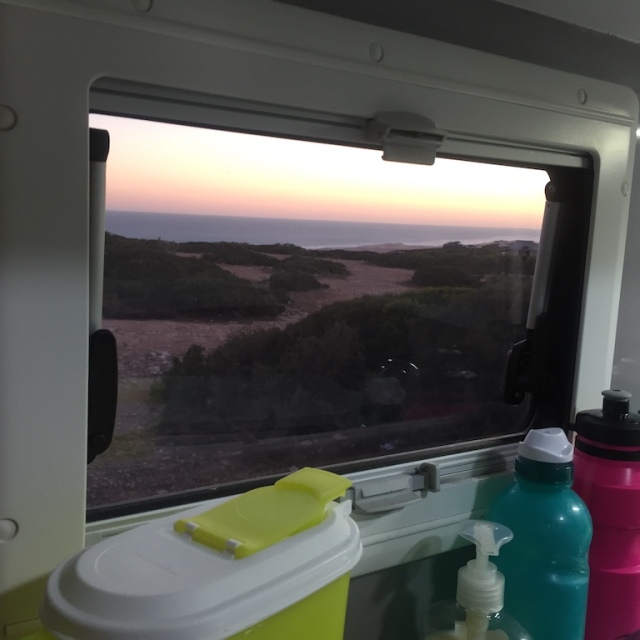 The next day, we hit the SA/WA border! We had finally made it to every Australian State!!! Only one Territory left to go… 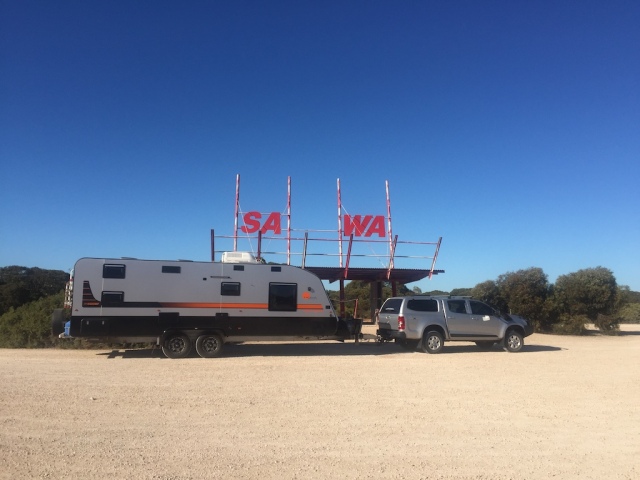 I wish I could say that I watched every shrub and piece of roadkill go by as we racked up the miles, but my attention span waned very quickly. However, thanks to my kindle, I whiled away my time reading an awesome new release by my author friend Louise Lyndon (do yourself a favour and read Nowhere to Hide). Alas, that only lasted for 24 hours as I literally devoured it, however I had another book that I was taking a break from that I could get back into (The Happiness Trap by Russ Harris – very enlightening if people are interested!) so that kept me busy!

Now that Nardia’s Bookclub has concluded, I shall continue the details of the Nullarbor… We pressed on and did a massive day tackling the 90 Mile Straight – and it is exactly as promised – long and straight!

We also celebrated another birthday on the road, this time it was Corey’s turn and again, it was another long travelling day – much like mine was a few weeks ago!  But the girls delivered the goods in terms of cards and presents and we celebrated with a treat of birthday Smiths chips (that cost $4 each for a tiny packet from Belladonia!!!) in the afternoon.

We pulled up in a free camp about 60km or so from Norseman for the night and thanks to us still adjusting to the new time zone, were on the road at 7.30am (normally we don’t get away before 9am!). Fuelling up in Norseman, we continued on to Kalgoorlie.  When we were planning our trip, we umm-ed and aah-ed about going to Kalgoorlie and had decided that if we did go, it’d only be for a night or two. In the end, the timing of Easter made the decision for us as we figured that Esperance would be much more popular over Easter and therefore harder to find a place to stay than Kalgoorlie. So we rang around and found a spot at the Discovery Park Kalgoorlie where we’re planning to stay for four nights.

And that was it – the Nullarbor Plain as crossed by the Sheriffs.  The 1500km that we covered in three days meant we had some pretty long days in the car but we were kind of glad that we just got it done. If I was asked if I enjoyed it, I’d say definitely.  It was really interesting and we had a great map that gave us information on each area so we were able to at least get a sense of what was around to see and do along the way.  We know we missed a few cool things – we didn’t check out any of the caves or blowholes or stop to look at the museums dedicated to the telegraph stations or the NASA satellite that fell from the sky in Belladonia, and perhaps, if the girls were a bit older we would have.

Corey and I would have loved to have had a crack at the Nullarbor Links course which an 18-hole par 72 golf course which spans 1,365 kilometres with a hole in each participating town or roadhouse along the Eyre Highway, from Cenduna to Kalgoorlie. Unfortunately, with our decision to just get it done, it wasn’t really viable with that approach. Plus, given the girls travelled like superstars we figured that we’d take advantage of that good thing whilst our luck was holding out and just pressed on and got it done!