This evening, we started up the War of the bedtime resistant toddler again. You may recall me having written about it before about six months ago.  Miss B was in fine form tonight.  She’s somehow developed the ability to scream at a pitch somewhere above Mariah Carey’s highest octave but just below the silent level that only dogs can hear.

She’s going through a phase of not listening and absolutely cracking it if she doesn’t get her way.  Tonight it was because she wanted more books to be read than we allow.  Normally, our rule is two books at bedtime.  We had to instigate a rule on how many because it was getting to a point that we were reading seven or eight books each night.  She is a book worm which is an awesome thing to see, but seven or eight books was taking nearly an hour to get through, and aside from taking away from her sleep, I’ve got shit to do before I turn into a pumpkin. So the rule of two was brought in.

But tonight she didn’t want to abide by the rule so the mexican stand off began.  My latest tool for dealing with tantrums at bedtime is to give her a warning that if she doesn’t calm down I’m going to leave the room and shut the door.  Of course, when I follow through she just loses her shizzle even more, however what I’ve discovered that whilst I’m on the other side, I can encourage her to get back on her bed and lay down on her pillow and then I’ll open the door.  I may repeat this three or four times but most nights that works and she stays in bed, calls me back for a cuddle and then goes to sleep.

Tonight wasn’t one of those nights.

So I implemented the technique and after three goes there was silence.  Normally if this happens, she normally yells out that she’s ready and I’ll go in, give her a kiss and she’ll go to sleep, but tonight she didn’t call out so I thought I’d leave her to it for a while and see what happened.  I could hear her talking away to herself and after about 40 minutes she called me and I went in.  She looked at me and told me that she couldn’t sleep until everyone was tucked up in bed and demonstrated how everyone had to line up and put their heads on a pillow and that I had to pull up the blankets up to their chin.

And it was that moment when I realised that this little girl is growing up so fast.  She is becoming more articulate and clearly spoken everyday. She’s developing and understanding contexts and experimenting with her feelings. And then there are times like tonight where she just melts hearts as she calls in her mama and asks to pull up the blanket so that it reaches the chin of her teddies.

After I tucked them all in, I went in 10 minutes later to take this shot: 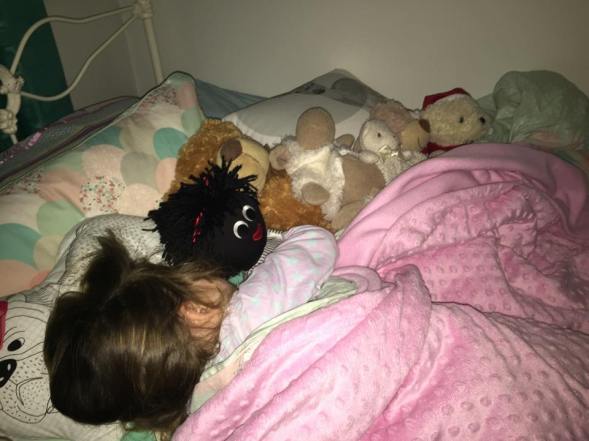 Do you fight the nightly bedtime war in your household? Does it ever trip you out when you see your child is growing and learning new things you didn’t realise they knew before?