Tonight’s post is bought to you by a determined two and a half year old and an equally determined (AKA stubborn) mother. Cue Mexican standoff!

I’m not sure how many of you have kids, but if you’ve got kids over the age of 2 then I’m pretty sure you’ll be picking up what I’m putting down here.  For the uninitiated amongst my readership (of 9 – thank you so much by the way!) I’ll spell it out for you.

Putting. kids. to. bed. sucks. arse! (and for the non-Australian readers, arse = ass!!)

I am going to preface the following by saying I am ridiculously aware of the fact that I have two of the easiest, cruisiest (because that’s absolutely a word!) kids that are out there. Easy pregnancies, easy babies and Miss B (whom this post is about) on the whole is a pretty laid back kinda toddler too.

But that doesn’t mean I don’t need to sometimes step away and take a breath from time to time.  My Dad was an act first and ask questions later kind of dad.  If we misbehaved, well, lets just say that we’d inevitably get a whack on the bum of some description, depending on the nature of the ‘crime’.  And whilst I can sit back and say that I turned out ok, my parenting style tends to steer away from severe physical discipline.  I have no issues with a tap on the bum to get the attention or to reinforce a point, but going down the path of getting ‘flogged’ like we did as kids holds no appeal.

That said, when I’m trying to rationalise with my two and a half year old (knowing full well that there is no such thing), I can totally see why my dad got so frustrated.  And just so that I’m not misunderstood, I in no way (and can I please reiterate this very clearly – NO WAY) condone excessive hitting of kids.

It’s just that toddlers seem to know how to push all the right buttons and somehow, as if by osmosis, they figure out how to play you like a violin!  How Miss B ever learnt to master the trick of pulling out a myriad of excuses to avoid bed time, I’ll never know.  I’m pretty sure they don’t teach them at childcare, yet she seems to have worked out, not only a long list of key excuses but also how to use them in the right context, delivered with the right amount of emphasis of tone and pause.

Although we’re not strict routine observers, we kinda follow the dinner, bath, book formula.  With an avid book lover on my hands, I usually can’t get out of story time for less than 5 books but I too am an avid book lover so that’s a value I don’t mind taking the time to instil in my daughters.

The wind down to most evenings start out promising, after all, any toddler-wrangling book will assure you that routine is key.  Dinner is generally a pretty laid back affair with no major dramas and a healthy appetite satiated, bath time tends to be a game which is enjoyable for both of us and story time, whilst long, is always the best part. But once the goodnights have been exchanged and the lights have been turned out, she will lay in the glow of the nightlight until you close the door, foxing you into a false sense of victory until BAM!

And then it begins… You go to check, reassure her that given she just had her nappy changed five minutes earlier that she had no poo and then put her back to bed.  Calm, gentle but firm and then you get back to the washing of the dishes.

Sigh! Off you plod, going through the motions of checking for a non-existent wet nappy, tucking her back into bed with another round of kisses and cuddles and firm instruction to stop being silly and go to sleep.  And then back to the kitchen to finish tidying up.

You take a deep breath – in and out – and hot foot it into her room so she doesn’t wake the baby. Mad mummy begins to emerge with threats of denied privileges the following day that you know she has no concept of, but you say them anyway because you’re using the last of the ammo in your arsenal.  You offer a perfunctory goodnight and a threat of a smacked bum next time, if you have to come back in there.  And then you go back to doing whatever it was before you were disrupted.

You can see where this is going right?  This fortunately doesn’t happen every night but it is a common occurrence of late.  I’m sure it’s just a phase and interestingly, I suspect it’s a testing of the boundaries between her and I as she doesn’t tend to carry on as much when daddy is home.  But I’m a tenacious kind of mumma and I’ve developed a couple of techniques to minimise the attempts to thwart bedtime so that they don’t develop into a full scale war.

And when I say full scale war, it’s a pretty accurate description.  The few times that we have been there has seen her throwing tantrums and getting upset because she can’t get her own way.  And me getting frustrated and trying to come up with other ways to get her to stay in her bed, sometimes resorting to holding the door so she can’t get out.  In moments like these, she tends to wear herself out and eventually falls asleep and I end up getting on with whatever needs to be done before I go to bed.

But I don’t often feel guilty about my approach.  With my husband away most of the week, the disciplining of our children generally falls to me.  There is a distinct good cop/bad cop dynamic and daddy is definitely not the bad cop.  I’m actually ok with that, he backs me when it’s appropriate and given the little time they have with him each week, I feel it’s important that that time is positive and memorable so I’m ok with the fact that I am the primary disciplinarian in our household.  But in order for our lives to work, I need to ensure that I don’t create bad habits or let behaviours that are not acceptable become the norm.  I can’t allow myself to create bad precedence borne from laziness or a lack of desire to be the bad mummy, so whilst I don’t have to deal with any major behavioural issues, I know I have to put in the hard yards now.

But it’s not easy! A couple of days ago, we had a similar evening and after about the 9th time of coming out of her room I yelled at her.  It was out of the norm and unexpected and it frightened her.  I shut the door on her cries and walked away from her room.  She came out again.  I was nearly ready to explode.  And in a small voice she asked ‘Mummy, put blanket on?’

I felt like the world’s biggest shit!  So I tucked her in, gave her a kiss and a cuddle and she went promptly to sleep.  And I vowed to do better next time.

There is a lot about Motherhood that I’m still working on.  I’ve been fortunate to not have suffered a lot of Mother’s guilt throughout my two and a half years in the role.  I’ve become so used to having such an easy time of Motherhood that my patience (which isn’t one of my virtues at the best of times) wears very thin when I’m challenged however I suspect that these challenges will pale into significance compared to the challenges that are bound to appear in future years.  I can’t expect my kids to stay so cruisey forever, and even if they are, there will be times where the virtue of patience will be a valuable tool to have in my kit when it’s needed.  I definitely don’t want to be a walkover but I also don’t want to be a mean, grumpy mum either.

So in this year of challenges and taking things on, I’m also going to take on being more mindful of the impact that my actions can and will have on my kids.  I’m sure that will guarantee some riveting fodder for future posts!!

What has been a relatively low key, mundane kind of day has evolved into a lesson worth learning.  Especially when you go into check on your kids and see this… 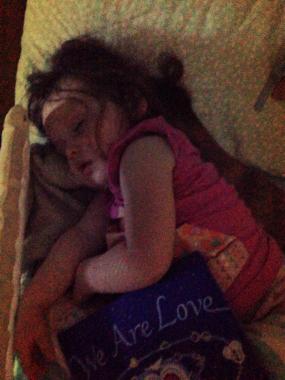 But not so much this…

That is a page ripped from one of the books that she is hell bent on sleeping with.  She’s always been so great with books – there have only been two, including this one that she’s done this to.  Both times after a meltdown when avoiding bedtime! Definitely not something that is acceptable behaviour. But that’s a conversation to have with her tomorrow…

Are you the disciplinarian in your household? Ever wonder how little day to day things you say and/or do might impact your kids into the future?

They’ve been itching to hit the playground all day @big4bellarine. We’ve finally returned so we can! #big4bellarine #alloadventure #camping #longweekend
And we’re back!!! We may not be undertaking another lap of the country but we’re looking forward to more adventures in our new poptop. Smaller and easier to get into river side places, this will suit our short trip style better than our big #ChampagneSuperNova. Thanks Mitch & Jerry @jaycoprestige. #alloadventure #makingmemories #jayco #jaycojourney #jaycojourneyoutback #travel #caravan