One of driving forces behind this new blog is to create a vault of stories and memories for my girls to look back upon when they are older. Not just about me and our life, but also about the grandparents they’ll never know. So I thought I’d kick off a regular weekly post called Memory Lane Monday.

Who knows what will crop up in this weekly segment! I’m a little bit excited, as it’ll give me a chance to go through some old albums and reminisce (although that could be severely detrimental to my productivity levels!). But I’m also a little scared. I am, in my own words, quite emotionally challenged so the thought of treading this path is a little daunting. Whether it’s been a defence mechanism, a survival tactic or I was just born that way I’m not sure, but I’ve never been that warm and fuzzy, share my emotions type of girl. But it’s funny how with time, and definitely Motherhood, the icy façade that has existed for so long has finally started to melt – an emotional global warming of sorts I guess! Whilst I’ve definitely not become Little Miss heart-on-my-sleeve, I will fess up and admit that of late I find myself tearing up at some of the tragic stories on the news, or when Ellen gives a deserving family a new car away on her show or the unexpected wave of emotions when I think about my Mum and Dad.

I’m not sure that adults who have lost both parents are called orphans, but whatever the description of this parentless status, I find that the more that time passes, the more empathy, understanding and respect I have of both my parents.

So I thought that for my first Memory Lane Monday post I’d introduce you to them and this week I’ll tell you a little bit about my Mum. So without further ado, meet Darrell and Sue (I’m on the left!): 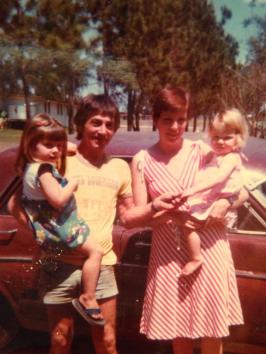 Mum and Dad separated when I was about 6 years old. But fortunately for my sister and I, (despite a few tumultuous years after mum left him) they became/remained very good friends once my dad sought treatment for his alcoholism. At the time we probably didn’t recognise how lucky we were, but when I hear stories from friends with divorced parents I can really appreciate what a gift they gave us. 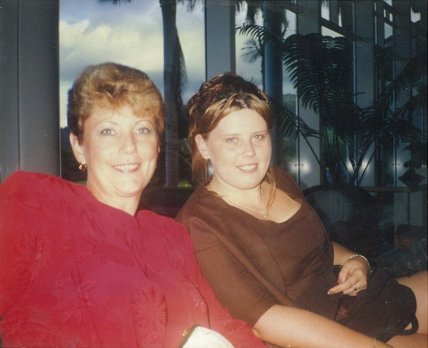 This pic was taken in 1997. I’m 18 in this pic and Mum was 41. It it was taken about 6-8 months before she died and it’s the last photo I have of us together. It sits on my bedside table so I see it everyday and it’s probably the image that immediately springs to my mind if I think or talk about her.

There’s so much I don’t know about my Mum’s illness. She was diagnosed with Breast Cancer when I was in grade 6. I vividly remember the day that it must have sunk in for me that my Mum was sick. In between big gulping sobs, I walked up to my grade six teacher Mrs Clissold and told her that my Mum was going to die. Wow! Being a teacher must be hard when kids come out with things like that. She comforted me and told me that she had a friend who had breast cancer too and that 13 years later she was still alive and going strong so not to worry and things would be ok.

She was right, to a degree. It would be 8 years later before Mum succumbed to this insidious disease.

Now that I’m 35, I find myself thinking about Mum at my age. She was diagnosed at 32 years old. I’ll let that sink in for a moment. 32 years old with two young girls. That’s roughly me now. My mind truly boggles.

I don’t remember the details of when she started her chemo and radiation, or when she had her mastectomy surgeries – she kept most of that quite hidden from us (and not long after she died I destroyed all her medical records in a cleansing ritual designed to purge). We went to live with our dad not long after she was diagnosed. My recollection of why we did that was something to do with schooling although I found out from close friends not long after Mum died that it was us that had requested to live with dad. It broke her heart apparently. It breaks my heart typing that sentence. It’s something that still haunts me today. It’s certainly not the way I remember it playing out.

There is so much to say about this woman who epitomises the very essence of strength for me. For someone who had such a short time on earth, she experienced so much and really took on board everything that life chucked at her. A life defined by alcoholism, single parenthood, cancer and responsibility for her kids… Her dreams never really got a look in at all.

Now that I have two girls, like Mum (well, before my brother came along 13 years later), she consumes my thoughts constantly. Not a day goes by that I don’t think about her. Did she struggle with getting me to sleep when I was 2 like I do now with Billie? Did she blow raspberries in that little spot under my chubby 6 month old cheeks and watch my eyes crinkle and hear my gurgling chuckles as I do everyday with Asher? Did she ever stop and wonder if and when she was ever going to pursue her own dreams? Were there times she ever looked at my sister and I and know that she wasn’t going to be here to see us grow up? Uh oh, and here it is… Cue the waterworks.

Nearly 17 years on, the memories of my mum come and go. In one instant I can be transported back to the age of 5 and can see Mum, Dad, my sister and I dancing around the kitchen table to Billy Joel like it was yesterday. Then just as vividly, I can revisit that last day, holding her hand and asking her to hold on until my sister arrived but having to say goodbye well before she made it. I don’t wallow in these memories day in and day out, but sometimes, when I look at my girls, I wonder what memories they will keep of me, whether they will recall them with such clarity and colour as I do mine.

And that’s really what’s underpinning this blog. My writing aspirations are a by-product in a lot of respects – a bonus opportunity for me to activate and follow my own dreams. But really, I want it on record. I want the safety net that I never had, in the I-can’t-even-bear-to-think-about-it event that I don’t get to see my girls grow up. Because when they’re in their 30’s and they too begin to wonder what our life was like, what kind of mother I was, what dreams I had, I want the opportunity to either talk them through all these posts over a cuppa or at the very least, give them these written words as a lasting legacy for them to hang onto.

Do you indulge in a wander down memory lane from time to time? Is there a song or artist that can bring back a flood of memories every time you hear them play?