There are only a handful of places that I have loved so much I felt sad when we drove away and Osprey Bay campsite in the Cape Range National Park just out of Exmouth is one of them. We lucked out with great weather, and despite a couple of windy moments, had picture perfect views everyday from our van. In fact, if there is a place to put on your bucket list, Exmouth and the gorgeous Ningaloo Reef is one of those places! 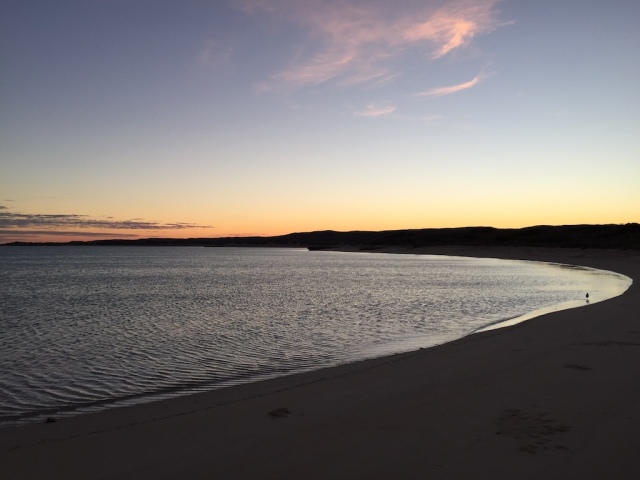 But our adventures were not just stunning views and lazy days. Nope, the entry into this little paradise was a little less amazing. I should preface this by saying that in the nine months that we’ve been on the road, we’ve been extremely lucky to not have hit anything whilst travelling on the road, well, until now that is. As we drove along the road headed towards Osprey Bay, the plains were just filled with little wallabies and euros (a bit smaller than a wallaby) and unfortunately as we drove past one, it decided on a kamikaze move into the side of our car. It did a great job of dinging multiple panels starting at the front passenger guard and making it’s way down the side to the end of the tub at the back. 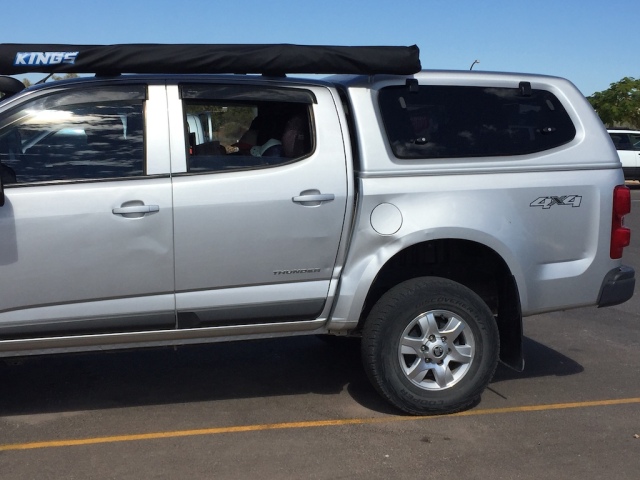 Both Corey and I were surprisingly chill about it though, as we’d figured we’d been lucky to get as far as we had with no major incident and I think knowing we’d be able to fix it via insurance helped a lot too!  So, in spite of our dinged up car, which showed every glorious bump and dent in the afternoon sun, we took some photos ready to send to our insurance broker and just got on with setting up.

The girls soon realised that we were in the vicinity of some other ‘kids’ and so they quickly made themselves known to our neighbours Richard and Fiona who had two daughters a little bit older than our girls. After gas-bagging for a good hour or so, we all decided that we’d better get on with our day, otherwise we’d still be here talking and wouldn’t get to see anything we’d come here to see. So as they went off to explore a nearby creek, we headed back into Exmouth to check out the Whale Shark festival, which just happened to be on that weekend. It was a great little community event and the girls loved seeing the performers on the trapeze and silks. We had also stopped for some lunch and were greeted by four emus wandering down the street near where we were seated. 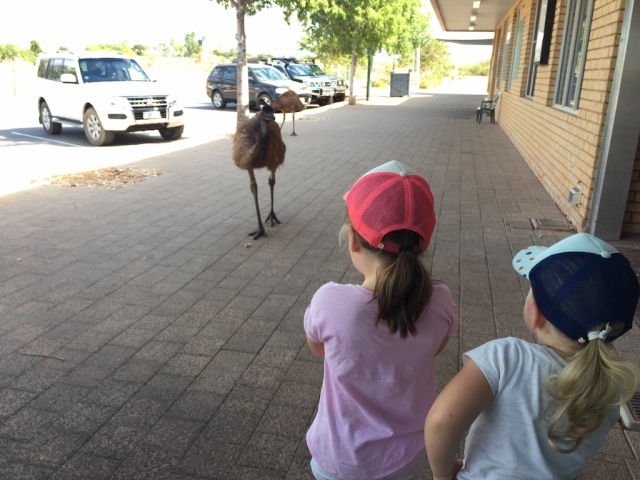 After the festivities in town, we headed back out to Cape Range National Park, stopping at the SS Mildura wreck and the Jurabi Turtle Centre on the way. We were surprised to discover a wreck called Mildura (our hometown) and discovered that it was a cattle-transporting ship that hit the reef and was ultimately wrecked up on it. 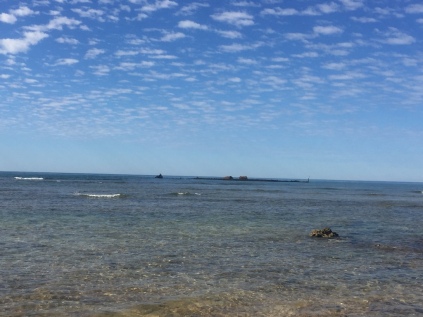 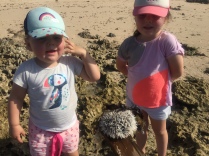 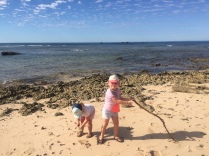 When we finally arrived back at camp, we headed down to the beach to watch another sunset with our newfound neighbour-friends. The girls all had a fabulous time exploring the rocky cliffs and chasing crabs. Well, until Miss A freaked herself out by the crabs and ended up getting a piggyback home.

Sunday turned out to be a lazy day, with a slow morning start before we head to Turquoise Bay for a swim with our neighbour-friends once more. What a stunning location. Obviously a popular spot for the tourists, Turquoise Bay was busy with backpackers soaking up the heat and families playing in the water. Miss A wasn’t up for a swim so she was happy to sit in the shade of the umbrellas whilst everyone else had a swim.

As we swam, schools of trevally swam in amongst our legs and the kids had ball trying to catch the fish with their buckets and hands. Again, we were able to watch the sun go down over the gorgeous bay as the kids ran amok in the sand as we walked along the spit to see the strong rip which was a part of the ‘snorkelling drift’. A snorkelling drift is where you enter at one point and explore the corals by allowing you to drift with the current to the next beach. This particular drift was quite strong so you had to make sure you ‘caught’ the right current otherwise you ran the risk of heading out to sea and the outer reef! So it was quite interesting to watch the people giving the drift a go (and if I’m being truthful, watch all the ignorant tourists who clearly had no clue and were wondering why they were struggling).

And as the sun set on another day, we marvelled at the ginormous the sunsets were over here and headed for home. 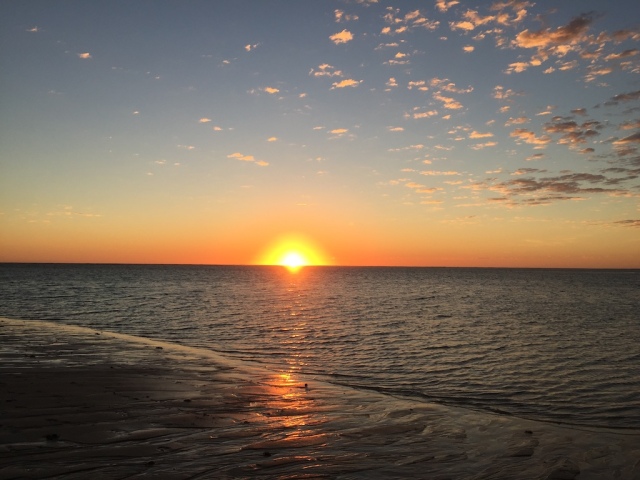 We hosted happy hour at our van with Richard and Fiona who were awesome company whilst the girls chilled out and watch a DVD inside the van. As we’ve said before, we’ve met some fabulous people on this trip that we’ve really clicked with and have found the same again with Richard, Fiona and their girls. We’re all heading in the same direction so perhaps we’ll run into them again up in the Karijini!

The next day, we decided we wanted to do something different. With two little people and a rapidly diminishing bank balance, we don’t splurge too often on tours however we really wanted to do something out on the reef whilst we were here and given the girls were too small to be doing a whale or manta ray swim, we decided to do a glass bottom boat and snorkelling tour through Ningaloo Eco Tours. Reasonably priced, it cost $190 for all four of us to go ($80 adults, $30 for children 3 and over and kids under 3 for free). It was definitely a worthwhile trip as the girls loved seeing the all the different coloured fish through the bottom of the boat. 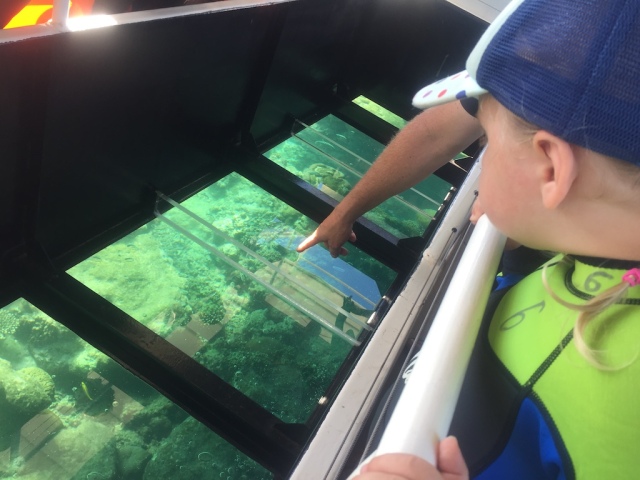 Both girls were given a wetsuit which they thought was very cool and were keen to get into water. They looked so cute! 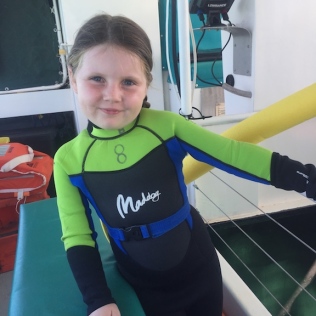 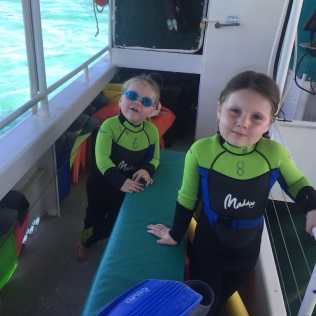 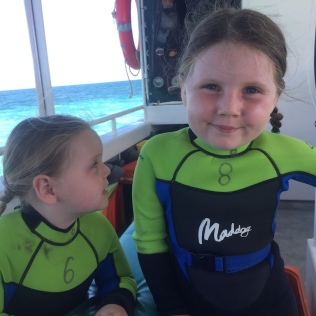 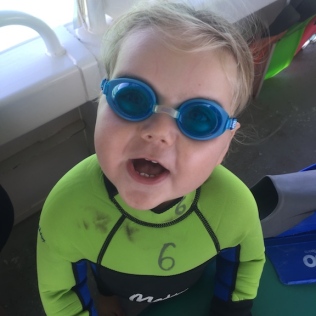 The wind made for a bit of chop in the water, which Miss A didn’t love. We didn’t try the snorkel with her as she was happy enough with her goggles but after about 10 mins she was over it. Corey took her back onto the boat and I stayed out with Miss B. She took to snorkelling like a duck to water, happy to get her head in the water and breath through her snorkel. After another 15 minutes, she was done so she went back onto the boat too for a snack and I finished having a look around.

I’ve done a lot of snorkelling growing up in Yeppoon, and in comparison, I have to say that the fish life around the Ningaloo was magnificent. Beautiful reef fish were everywhere and I counted over 50 different species before I gave up. There wasn’t much in the way of other marine life that I’m used to seeing such as sea stars, sea cucumbers, eels or crabs but apparently in some of the deeper spots there are big blue sea stars as well as shark and turtles. I wished I’d had an underwater camera to get some pictures, especially of the parrot fish, which were such gorgeous blue and turquoise colour as they crunched on the coral.

After everyone was back on the boat, we checked out some other coral bommies and even saw two Green Turtles which the girls loved. It was only a couple of hours, but it was definitely worthwhile. 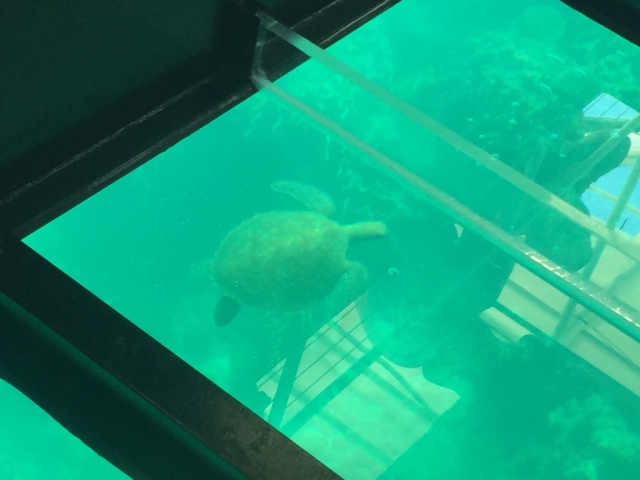 We spent the afternoon back down by the beach although Miss A decided to stay out of the water.  Miss B was keen so she went in with dad whilst we stayed on shore. 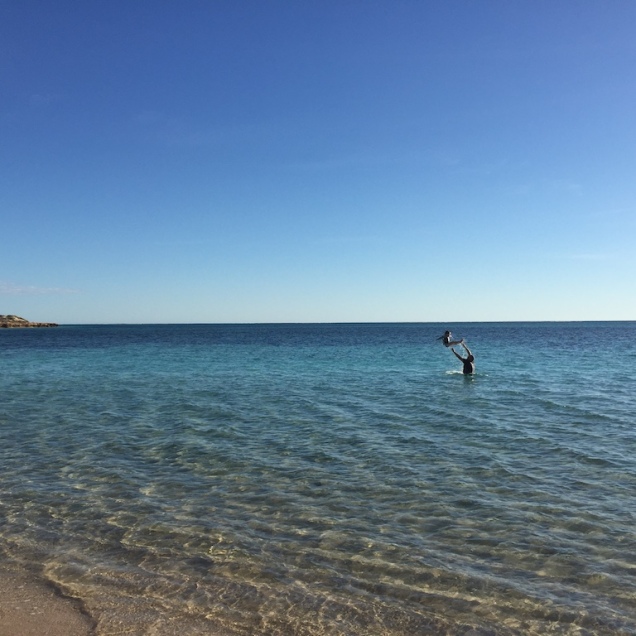 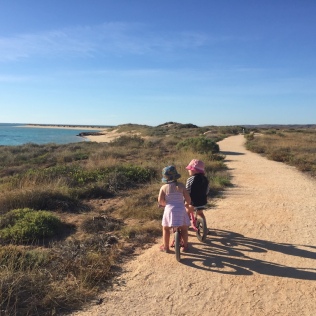 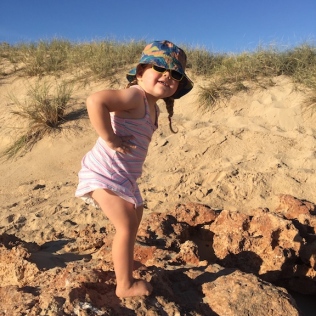 And when we got back to the van, the camp volunteer bought over a baby echidna that he’d found in his caravan annex to show the girls! 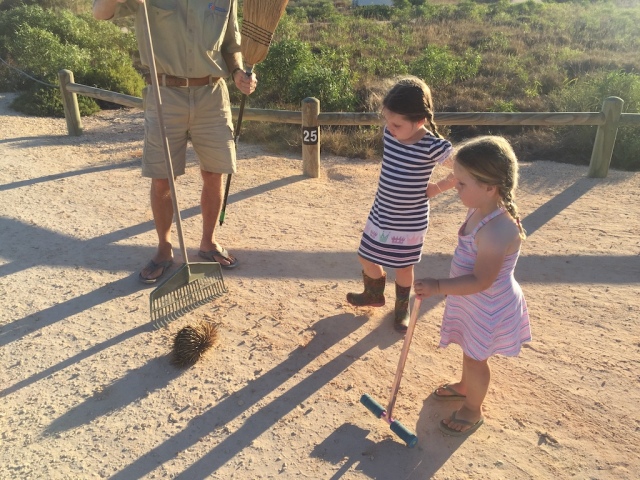 And just like that, our four nights at Osprey Bay on the Ningaloo Reef were over. With the girls tucked up in bed, Corey and I sat outside and enjoyed the cool breeze and the clear sky filled with stars and vowed that next time, we’d stay here for at least a week! 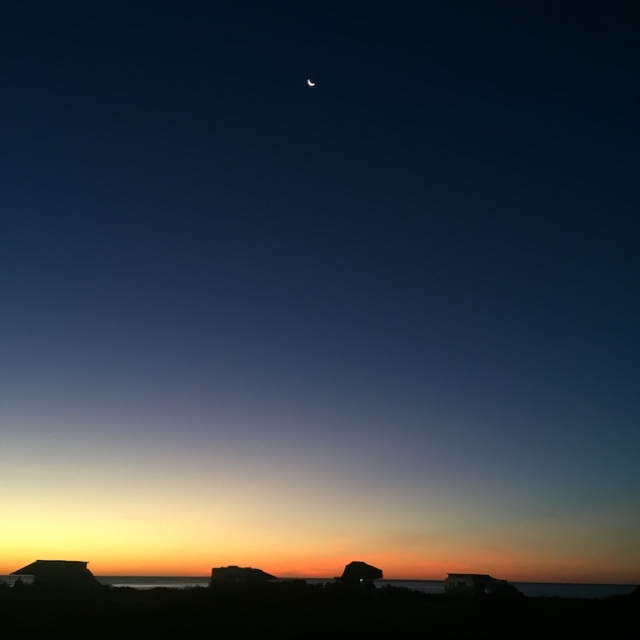 Do you have Exmouth and the Ningaloo coast on your bucket list? Have you ever snorkelled an Australian reef?