We’d been looking forward to spending some time in the Streaky Bay shire as we’d heard so many great things and of course, many of the camping, caravanning and 4wding magazines always write up great reviews.

Fortunately for us, we have a friend who has a holiday shack that we could use whilst we were in the area, meaning that we had power and as much tank water as we could possibly want. I’ll let you in on a little secret, and I don’t mean this to offend, but South Australia has some of the worst drinking water I’ve ever tasted. So salty! So, to be able to bathe and drink in fresh tank water excited me more than it really should have. Not to mention the heady excitement of going from a quick shower in the van every couple of days to the utter luxury of a shower twice a day (because the tanks would be overflowing during winter and when the offer was made to use as much as we liked… well, I did!).

The first afternoon was spent catching up on housekeeping. I know people thing that those of us who pack up to spend a year travelling around the country are on a big perpetual holiday (and yes, well, we are), well, we also have to do the fun things like laundry. So ten loads of washing later (including bedding) and we’d controlled the laundry beast (a record of 10 days without doing any laundry!).

In all, we ended up spending five nights in the Streaky Bay region and took in the highlights of the area including: 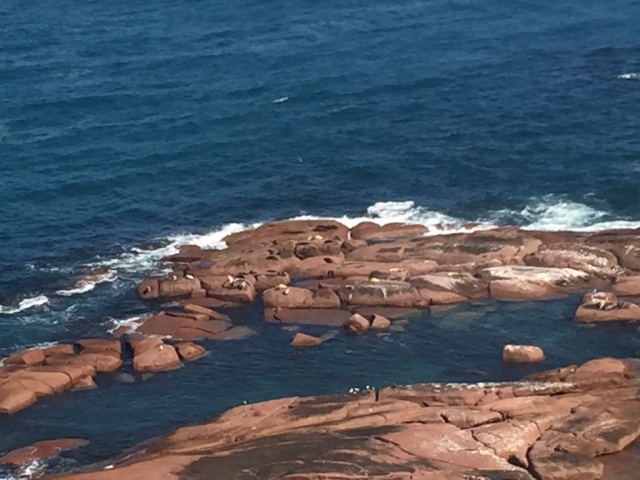 Home to Australian sea-lions (one of Australia’s most endangered marine mammals and rarest seals), as well as New Zealand Fur Seals, Point Labatt is the only place on the mainland where Australian seal pups can be seen. This colony is protected from land predators and we were treated to a couple of dozen seals basking in the sun on gorgeous orange rocks – they weren’t easy to spot from the height of the look out, but the girls had fun trying to find them. And spot the difference between the Australian Sea-lions (bigger with creamy fur) to their NZ cousins (smaller and dark grey – closer to the ocean in this pic).

We did a number of drives including the Cape Bauer and Westall Loop scenic drives. The Westall Loop included the Whistling Rocks and Blowholes: 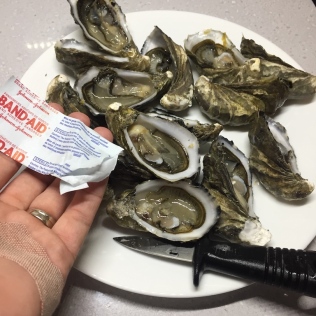 So, it’s no secret I’m the fan of oysters having sampled them in several parts of the country so far.  We bought some straight-from-the-basket oysters from Evans Oysters in Streaky Bay (only $9.50 a dozen and he threw in a few extras).  We then went off to buy an oyster knife which in hindsight was bad move given we ended up having to cordon off the kitchen to create a crime scene after a stabbing – thankfully not fatal, nor compromising of the delicious oysters! 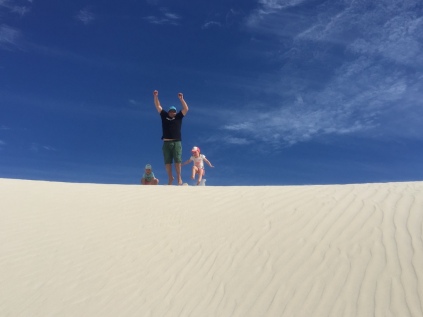 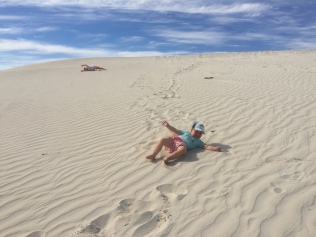 An afternoon of fun playing in the Yanerbie Sandhills which the girls absolutely loved, before looking for creatures in the Smooth Pools rockpools: 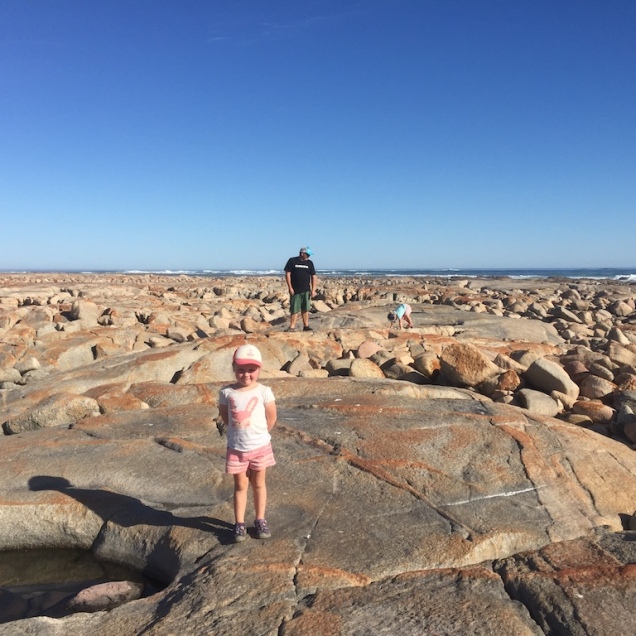 And topped off with a sunset sandcastle session featuring a couple of cold bevvies and a marathon Bitey Bastard (aka giant March Fly) killing spree using a spade as a flyswat (I got up to 30 before I lost count).

Murphy’s Haystacks the next day proved to be an interesting afternoon. After catching up with a friend who lives in Streaky Bay for morning tea, we headed off for a drive and a look around these geological rarities. To be honest, I can’t remember the specifics, but basically, after millions of years of erosion, this weird rocks have remained. The girls loved climbing them and sliding down them!

And before we knew it, it was time to move on again.  A massive thanks to Kate & Red for allowing us to use their awesome little shack.  We loved our time around Streaky Bay and will definitely be back again in the future!

What are your favourite things to do when you’re exploring a new area? Have you ever stabbed yourself trying to shuck oysters?

They’ve been itching to hit the playground all day @big4bellarine. We’ve finally returned so we can! #big4bellarine #alloadventure #camping #longweekend
And we’re back!!! We may not be undertaking another lap of the country but we’re looking forward to more adventures in our new poptop. Smaller and easier to get into river side places, this will suit our short trip style better than our big #ChampagneSuperNova. Thanks Mitch & Jerry @jaycoprestige. #alloadventure #makingmemories #jayco #jaycojourney #jaycojourneyoutback #travel #caravan