They get shorter, I promise you!!!

Base at New Norfolk

So, in my last post, you would have seen us just finish up our Christmas sojourn to Strahan (and the comfort of a hotel room!). But of course, when on a trip like ours, it was time to get moving again. We left Strahan thinking that we’d stop the night at the moody Lake St Clair.  But as we neared in consultation with Wikicamps, we were discovering that there weren’t a lot of easy options if we didn’t want to stop for one night, unpack and set up and then get going again the next day.

So, we promptly pretended like we didn’t need to worry about it and concentrated on the fun stuff.  Like this fabulous little rainforest bushwalk! 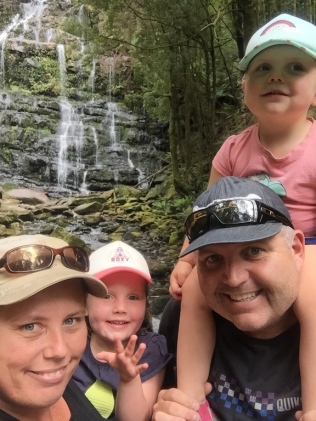 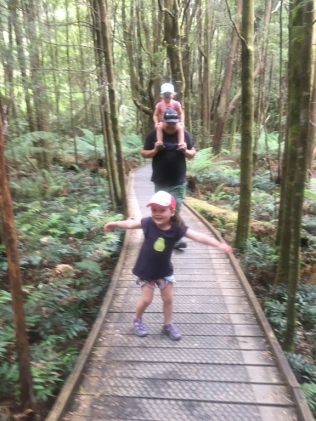 We also stopped at the Wall in the Wilderness, which is a big mural made from carved huon pine.  We weren’t allowed to take pictures inside, so here’s a couple I grabbed from the internet (credit: think-tasmania.com.au).  It was stunning – artist Greg Duncan clearly so much talent, and much time and effort that has gone into telling the story of Tasmania in carving.  The detail in each piece is extraordinary! 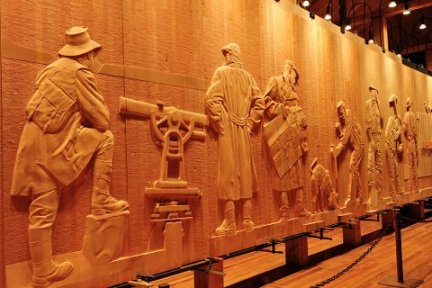 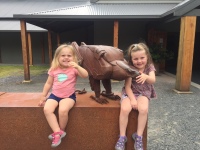 We finally got to Lake St Clair on a miserable grey afternoon.  It was gorgeous despite the misty weather. It’s also the finish line for those who attempt the Overland Track from Cradle Mountain. We actually had some friends doing the Overland Track with their three pre-teen children (I think they’re all pre-teen – sorry Kell if I have that wrong!). Regardless of their age, it was a pretty magnificent feat to walk 80km+ starting in a blizzard and ending in a heatwave (they left a week before Christmas – SUMMER!!!). Anyhoo, my point was that Lake St Clair is the end of the Overland Track, and we saw a lot of weary travellers returning from their walks. 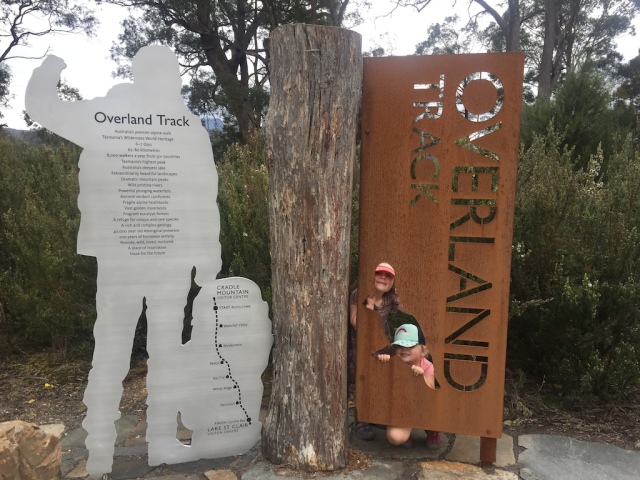 We wanted to do some of the bush walks along the lake, but it’d been a long morning and we had a cranky little girl who refused to walk (read: who really needed a nap!), so after sussing out our hotel options (we didn’t really want to go to the effort of setting up the tent for one quick overnight stop) and discovering that all accommodation outlets were either fully booked or came at ridiculous cost we called our caravan park in New Norfolk to see if we could check in early. Thankfully we could and so we pushed on, made it there before dark and made it our home base for the next week.

An early morning shower heralded the start of a new day, and whilst none ended up on my head, we did end up with a little lake pooling under Miss A’s bed. 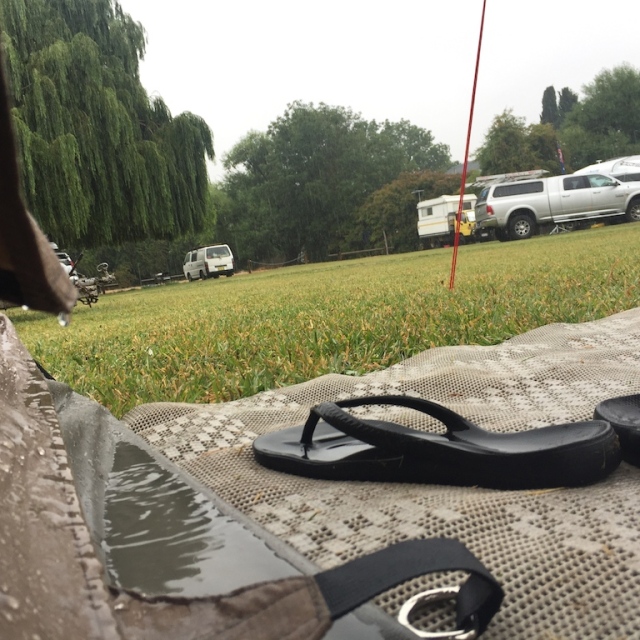 So Corey headed to Mitre 10 to buy a big tarp and some poles and rope ($100+ later!!!) and with our makeshift cover sorted, we got ready for our day. 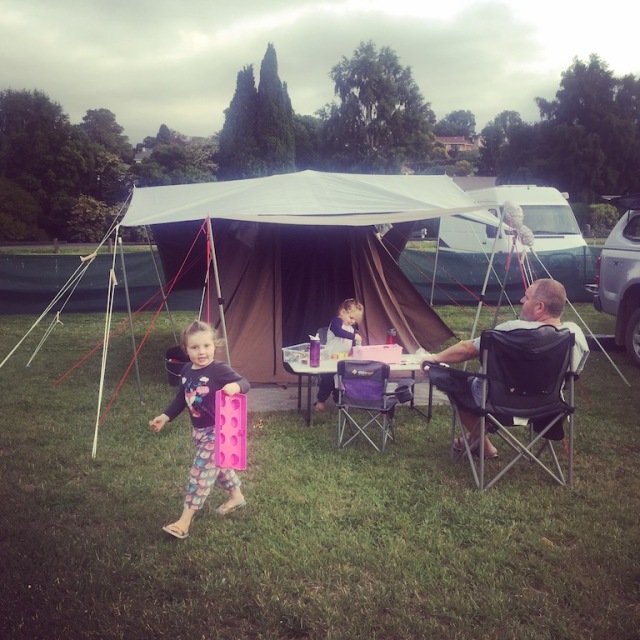 Given the dodgy weather, we decided to explore Hobart and particularly Constitution Dock and the museum. Checking out the Dock, we were able to see a couple of the big Maxi boats that had already made it to Hobart, including Perpetual Loyal. 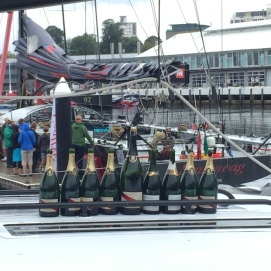 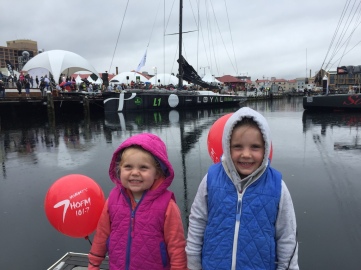 We also stopped for Fish and Chips for lunch and ran into Terry & Julie who had been out on a tour. After a quick catch up, we headed to the Hobart Museum, which not only was free (inner tight-arse rejoice!) but was designed for kids with interactive displays and lots of things to touch (great for the girls). And apart from Miss A climbing all over some antique chair in the art room housing over $7m of artwork (or so Corey was informed after a security guard came racing over to reprimand – although with every other room filled with tactile, touchable things, a little rope or barrier around the things that are off limits wouldn’t go astray – just sayin’), the girls had a great time at the museum. 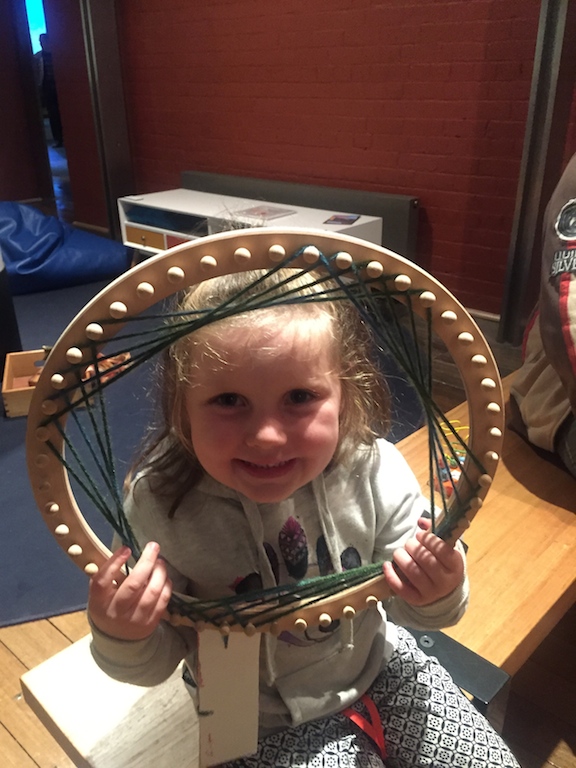 We then headed to the information centre to find out what else there was to do with young children, and also to see what the city did for New Year’s Eve. Hot tip, don’t expect too much from the Hobart information centre. Perhaps it was just officer I got, but it would appear that no one really brings their family/kids to Hobart because she could not list one single thing for families to do, including on New Year’s Day and even with some pretty heavy prodding and suggestions of what I knew I got nothing, nada, *crickets*. If it wasn’t so busy I would have spoken to someone else but after waiting in line for 20 minutes to get served and with the girls getting bored and antsy, to get such crap advice just annoyed me and I just wanted to get out of there.

There’s quite a lot I would have liked to have checked out regarding the historical side of Hobart, but the girls make it a bit challenging and get bored really quickly, and when you’re paying family prices, it seems a waste to spend the money and not get to absorb and read about the goings on there. Will have to save that for the retirement trip to Tassie!

With slightly better weather the next day, we headed down the coast and over on the ferry to Bruny Island. What started out as a grey and miserable day, broke into some sunshine as we made our way to the bottom of the island to the Bruny Island Lighthouse. 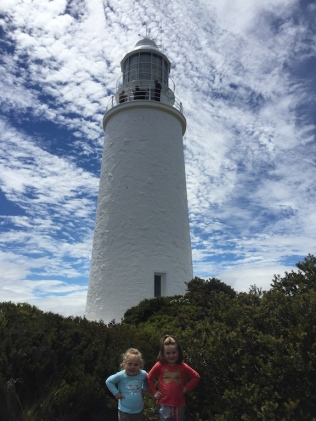 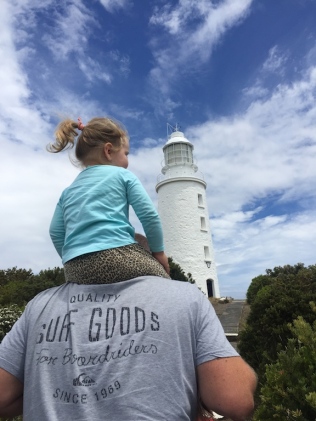 It was nice to see some sun and shed the jumpers, but once we head back up the coast, the grey came back and the jumpers back on. We stopped at the Bruny Island Pub for lunch which was jam packed, and whilst we waited over two hours for a table and our food (they kinda forgot about us!), it was a nice lunch.

Having lost time over lunch, we only had a short amount of time to check out the Bruny Island Cheese Company (gutted!!) and the Get Shucked oyster bar where I ran in, bought a dozen fresh oysters for $16 (hello dinner!), and we were back on the Ferry and heading home again. 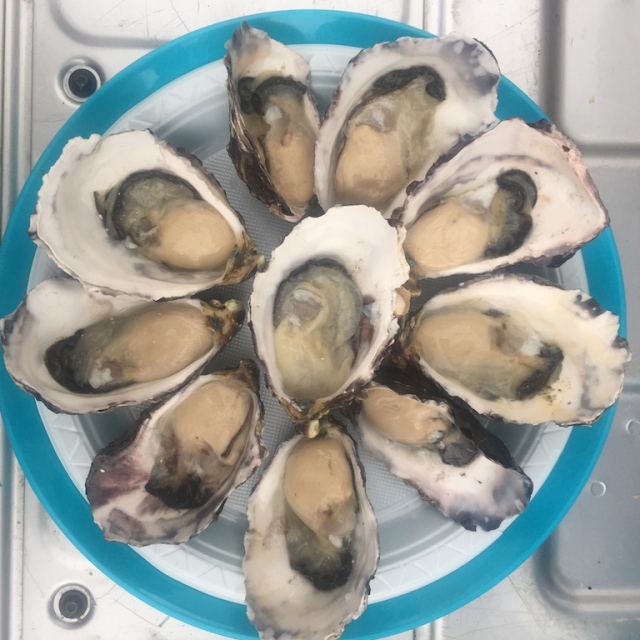 We hadn’t really heard anything about the Walk through the tree tops near the Hartz Mountains until we were flicking through some tourism brochures.

With the few extra days up our sleeves given our express drive from Strahan, we decided to go and check it out. I love trees and the reviews were really great so it seemed like something we’d all enjoy.

We headed to Geeveston and into the mountains until we finally arrived. Unfortunately we had some tired and grumpy kids who weren’t up for big walks, so we didn’t get to do the big loop walk or check out the suspension bridges, however, we did get to do the airwalk which was awesome, as well as a short walk through the rainforest which was even better!

The airwalk really let you see the size of some of the trees there, many of which were only planted in the 1960s but had grown quite tall over the past 50-60 years. Some of the older growth trees (1000+ years old) were amazing and beautiful, and it really makes you think about how progression of society has really cost us some magnificent environments. Corey and I have remarked quite a lot on this trip, about the views and the thoughts that the first explorers must have had when they first cut a path through some of these forests. Not to mention what the indigenous population in the area would have had as their home. It’s really quite profound when you start thinking a little deeper. 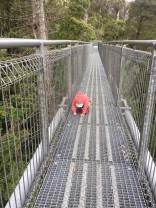 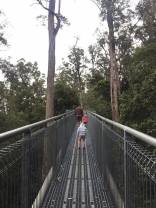 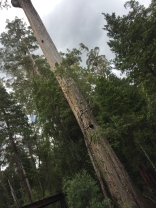 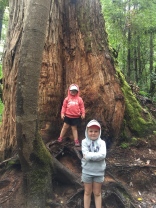 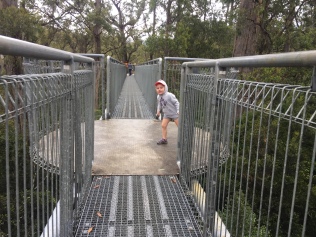 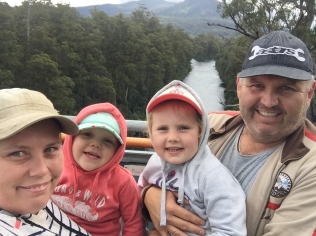 The rainforest walk was awesome – so lush and green with my favourite tree ferns everywhere. You could really get in and around the trees on this walk. You could even try to hug them!!! 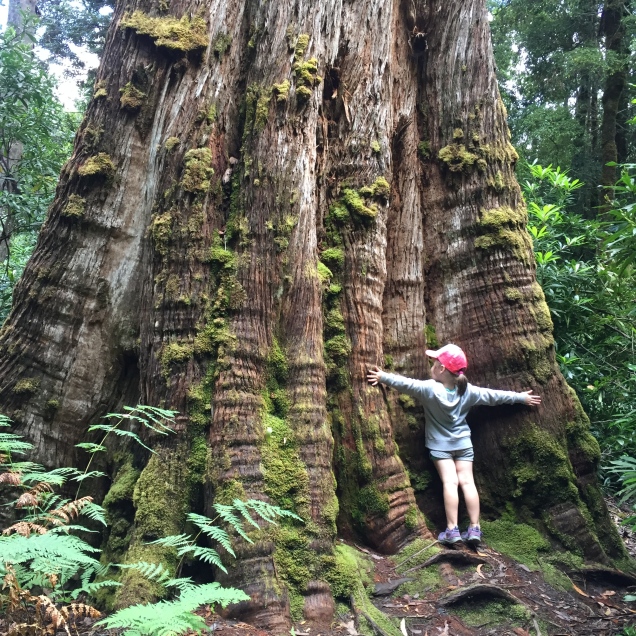 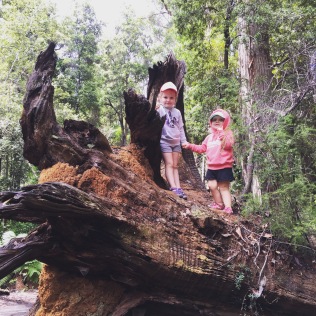 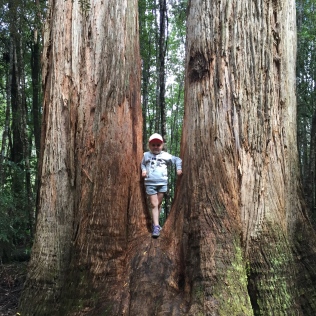 Everyone who goes to Tasmania inevitably says that you have to include Salamanca Markets on the itinerary. So when Saturday rolled around, we headed back to Hobart to tick it off the list (even Corey who isn’t much of a market fan). The crowds were massive, no doubt due to the Sydney to Hobart Yacht Race, the Taste of Tasmania festival which was running adjacent to the markets and NYE activities, but we got to have a good explore and I think had it been a different kind of holiday, where the money was flowing a little more freely, I would have definitely walked away with many more bags than I did. As it was, we picked up few bits and pieces, strawberries and some nuts and sampled some cheese (Coal River Farms – delicious!) and salmon before picking myself up a little pair of Tasmania Blackwood earrings to replace the silver pair I’d lost somewhere in the caravan. 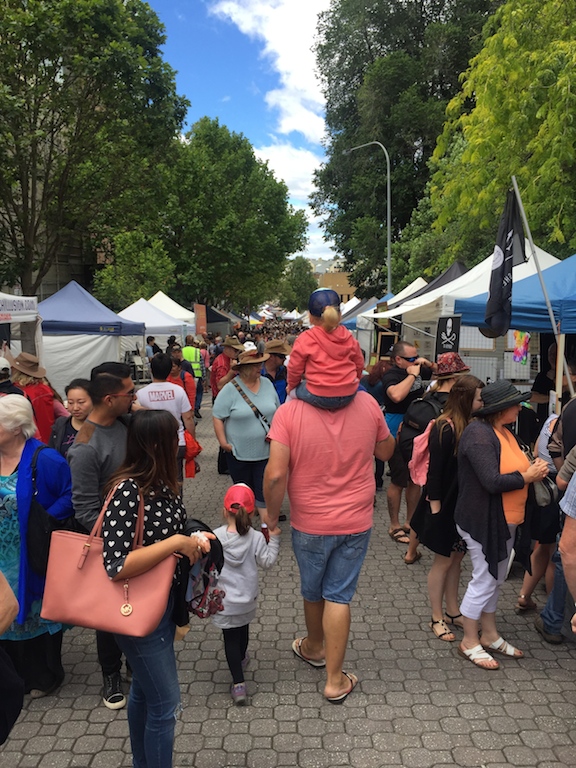 Oh, and we literally bumped into Julie in the park, who had left Terry sampling Beers at the Taste of Tasmania festival enroute to check out the markets.

There were a ton of kids activities in the park, so the girls had fun jumping and painting and playing whilst we sat and just soaked in the atmosphere before heading up to Mount Wellington to let the girls have a rest.  We didn’t even get out on top it was so busy so we turned around and drove back down! 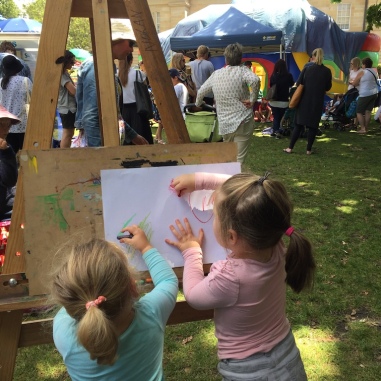 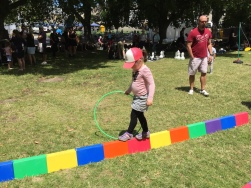 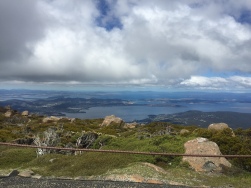 Our initial plan was to head back to camp for a rest and then return to Hobart to watch the family fireworks, however, once we got back to camp, another family had set up next to ours with two children in addition to three year old Jack who was camped on the other side and we’d met the day before.

So after chatting away (turns out this new family was the twin brother of a guy Corey used to work with – go figure hey!), we decided to ditch our plan to return to Hobart, and enjoy a few drinks and some awesome cheeses with our neighbours and leave the kids playing and enjoying themselves. 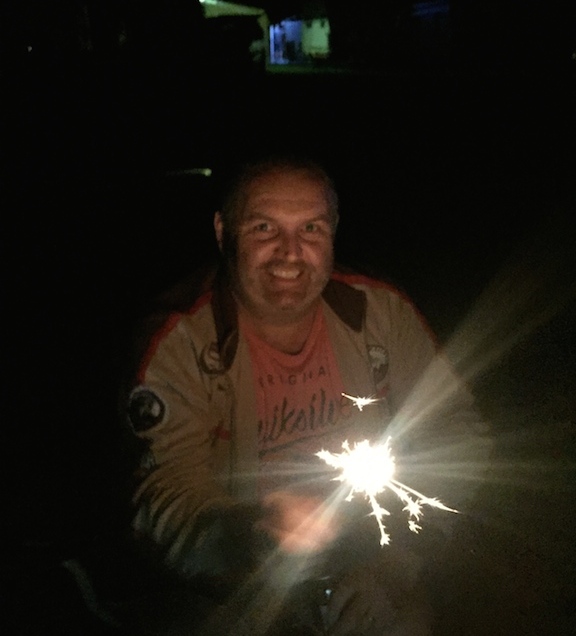 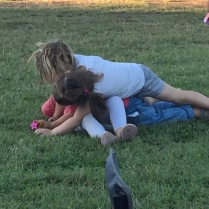 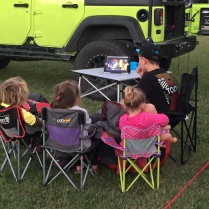 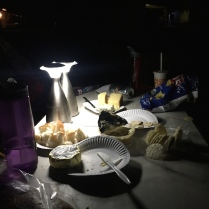 How did you spend your New Year’s Eve? Have you ever met people and then bumped into them unexpectedly later?

Missed our other posts about Tassie? Click here for Week 1 & Week 3