So I’m sitting here at Lake Bonney, near Barmera in South Australia, lamenting the fact that I’ve left writing about our three weeks in Tasmania all in one go. Note to self: When you leave writing three weeks worth of posts until the end of a trip instead of posting them during that time (even though it was lack of wifi etc that cause it to happen), it becomes an overwhelming chore!

But, it’s a nice problem to have as we’ve just spent three awesome weeks in Tassie and so I’ve attempted to break down our trip in a way that will be easily digestable. Initially, I was going to do a big summary post but when I hit 6000 words (without pics!), I kinda figured that no one loves reading my fluff that much that they’re going to sit through 6000 words in one post!!! So I’ve broken it down week by week instead!

But first, a bit of backstory…

Tasmania was always going to be an inclusion in our trip around the country, and during one late night itinerary planning session, we decided we wanted to find a spot that we could create an awesome Christmas memory, especially as it would be the first time in over a decade that we weren’t spending Christmas with Corey’s family.

As we worked through the options and factored in the fixed dates of places we had to be at certain times, it seemed an obvious option to make Tassie our Christmas destination.

We allowed ourselves three weeks, which in hindsight was a gross under estimation on what we should have allowed. At least a month but ideally six weeks would have allowed us to really stop and have a good look around, but as it was, we had three weeks and so we stuffed as much of it as we could into that time.

We decided against taking the van pretty early on in our planning, as it was just way too expensive to justify for a three week trip – had we gone for six weeks or more, it would have definitely been more worthwhile. That said, given the size of our van we now know that the windy, narrow Tasmanian roads would not have been kind to our big, heavy setup so it was a blessing not to have it in the end (Although our backs mightn’t agree having spent two of our three weeks sleeping on inflatable mattresses!)

Having left booking our tickets a little too late, we paid an additional $400 on the original researched price for our vehicle and a cabin for the girls. A lot of people who had been over to Tasmania on the boat with small children recommended getting a cabin and whilst it certainly adds to the cost, it definitely made the trip a lot more comfortable (especially in dealing with a bout of seasickness for poor Miss B on the way over, and an EPIC meltdown (by Miss B) on the way back).

We ended up doing a day sailing, mainly because I’ve become such a tight arse I wouldn’t spend the extra $400 return for a night sailing. Would the extra $400 have been worth it? Yeah, it probably would have as it was challenging to find any space up on the decks during the day (due to people who didn’t buy a cabin sleeping on every horizontal surface!) and sleeping during the day was just about impossible for everyone except Miss A. 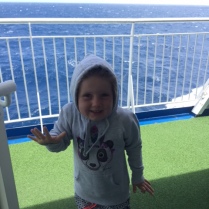 We splurged on a hotel for the night once we got off the boat, and the next morning we headed west. Our original plan was to head to Stanley and then take an off-road 4WD track down the west coast to Strahan, our Christmas destination. But recent rain, and wanting to ensure we covered Cradle Mountain properly, we ditched those plans and decided to head to Cradle Mountain first via Burnie. We stopped at a little town called Penguin where we grabbed a coffee and checked out the foreshore whilst the girls counted the number of penguins they could see that decorated the town.

We then headed to Burnie to check out the Maker’s centre. After the golden years of manufacturing were over, Burnie reinvented itself as a place of tourism, capitalising on their strong history of being ‘Makers’ paying homage to the industry forebearers in the forestry (paper), manufacturing and farming.

With our cultural cups full, we headed up to the top of a hill overlooking the Burnie coast and the docks and had some lunch before we making our way to Cradle Mountain. 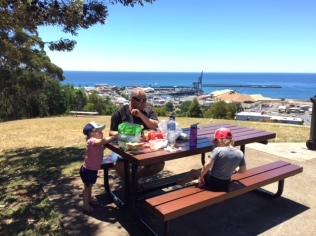 It’s so hard to describe just how beautiful the country around Cradle Mountain is. We stayed at a caravan park just opposite the Visitor Information Centre and squeezed ourselves into a tiny little campsite which did the job for a couple of nights. 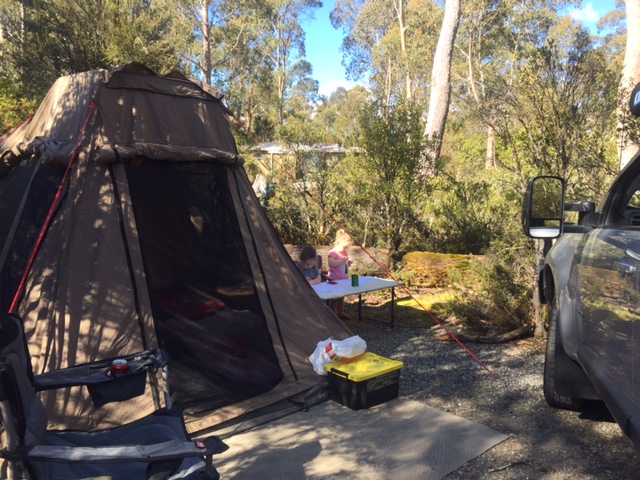 After waking up to feeling of condensation dripping on my head, we decided to make the most of the shuttle bus that takes you up into the National Park and start our day with the 6.2km walk around Lake Dove. When I say start the day, by the time we get up, dressed, breakfast and kid-wrangling, it was well past 10am and starting to warm up. That notwithstanding, we headed off with water and enthusiasm and made it around the lake – which by the way, Miss B did all by herself – she was so proud as were we.  And how’s the view! 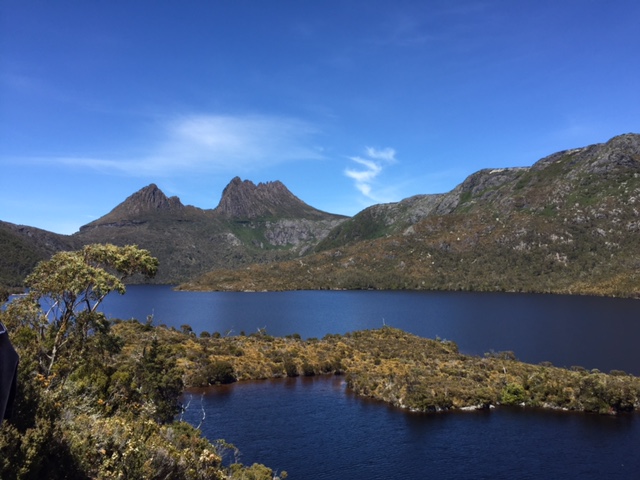 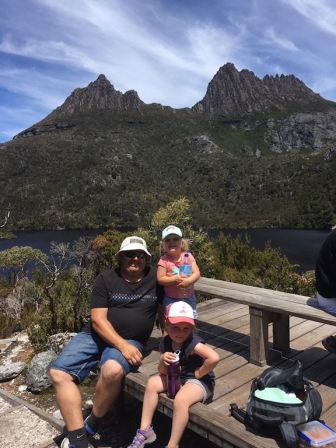 Miss A bailed about half way, and demanded a lift for the rest (and the hardest, mostly uphill) component of the track!  But we had an awesome day! 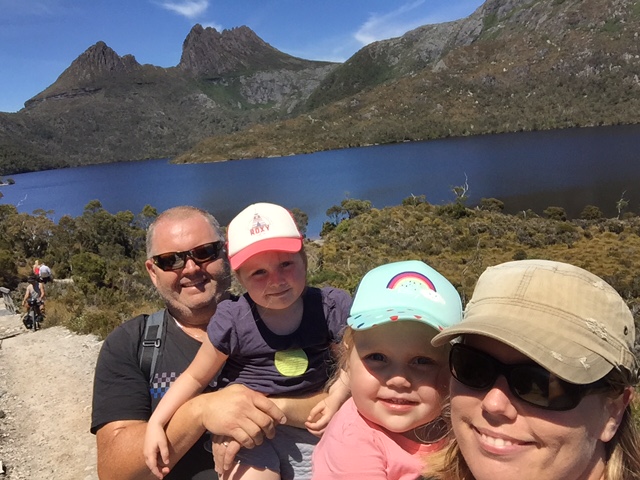 After such a huge walk, we stopped in at the interpretation centre to learn a little more about Cradle Mountain, and learned that early explorers were so impressed and enamoured with the area that they advocated for it to become a National Park so that future generations would be able to enjoy it in the future.

After dinner, we went back up to do the Enchanted Walk in the hope of seeing some platypus and other wildlife and were lucky enough to see three wombats, our first in the wild, including this fella who was happy for me to get up close to take his picture.

We headed back to camp on dark and got the girls settled who were excited to be sleeping in the tent. There was heaps of wildlife around our campsite including some Bennetts wallabies, pademelons, echidnas and lizards which the girls loved.

When it was time to head to Strahan, we packed up the tents, the mattresses and the sleeping bags and arranged them in a roof rack bag to put up on the roof rack. Being heave, it took a bit for me to lift it, and Corey’s suggestion of 3-2-1 throw it on the roof ended up with a broken weather shield on his side. Oops!

The little seaside village of Strahan was such a great place to spend Christmas and we were lucky to get an awesome deal to spend three nights at Strahan Village in a family hotel room (only $95 per night!). Arriving on Christmas Eve, we decided to go and watch a local production called “The Ship that Never Was”.

Running every single day (except Christmas Day) for over 20 years by the Round Earth Theatre Company it definitely exceeded all expectations, having seen it on TV and adding it to our ‘Must-do’ list.  With only 2 regular actors, it relies on audience participation to make it work.  And Corey was cast as the mastermind behind the whole adventure. 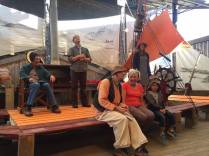 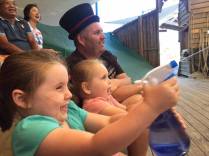 We spent Christmas Day on a river cruise which was an awesome experience.

The seven hour cruise took us through the harbour and up the Gordon River and the rainforests along its banks which are Heritage Listed. 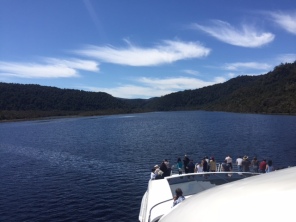 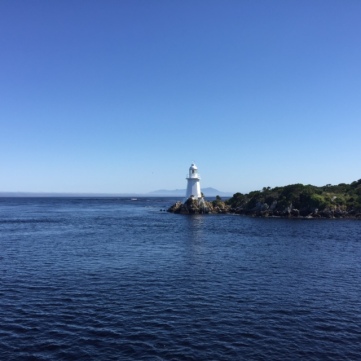 It also stopped at the remains of the secondary penal settlement on Sarah Island which was an absolute highlight for a history buff such as myself.  Sarah Island was a secondary penal settlement was where they sent reoffending convicts if they’d been caught doing something really bad whilst either serving their first sentences, or after they’d finished their original sentence.  It was generally reserved for the worst of the worst, but the fascinating thing about Sarah Island, is that it became a prominent ship building enterprise as a result of the plentiful Huon Pine in the area (which is now illegal to cut down). It’s the story of convicts who built a boat on Sarah Island under the design on a world renoun shipwright, before stealing it to escape, that forms the basis of the “The Ship that Never Was” play. 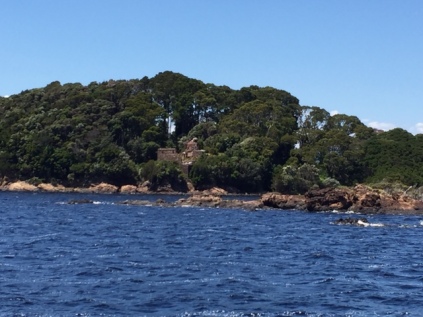 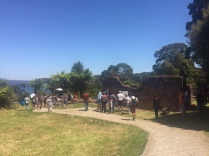 It was also in Strahan, both at the play and on the boat, that we got to know a fabulous couple from Queensland (Hi Terry & Julie) whom we ran into, quite literally, several times over the next few weeks.

On Boxing Day, we finished up our time in Strahan with a drive along the beach to see the lighthouse we’d passed the day before from a different angle.  And then time to pack up and get ready for a new place to explore.

Where did you spend Christmas this year? Have you ever played a role in an audience-participation based play?

Want to read more about our trip to Tassie? Click here for Week 2 & Week 3