Our time at South West Rocks was steeped in history and stunning in its surrounds. Normally we don’t book anywhere and just wing it, but we had noticed that the closer to the coast we are, the harder it is to get in where we want. Sure enough, we left making any booking too late and ultimately paid for it not realising just how busy this area gets on a weekend. We were hoping to get a powered site at National Park managed Trial Bay Goal Campground, but they were all taken and after ringing around, we decided to take an unpowered site given the choice between that option for $30.75 per night or a well known chain caravan park charging $65 per night.  Not surprising we opted for the campground (#tightarsestrikesagain). And after our first evening walk around the grounds, I’m so glad we did. 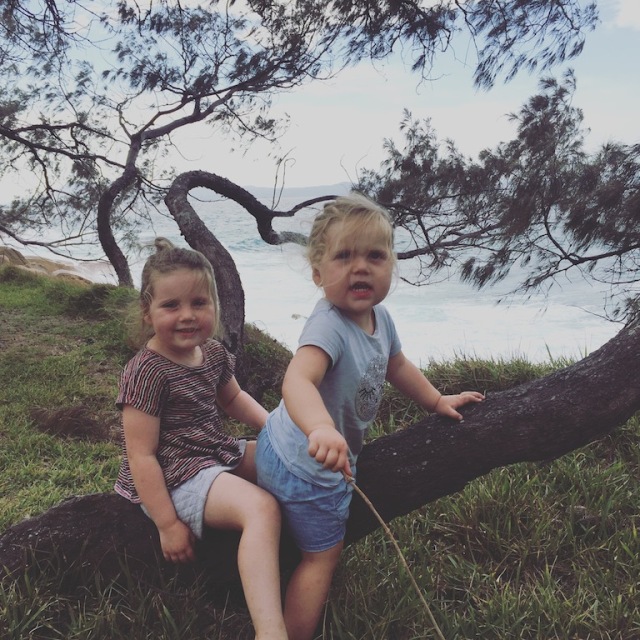 Set up pretty much as a caravan park, the Trial Bay Goal campground is situated, quite literally on the slopes of the hill of the prison that is built there. Unlike other penal institutions, this particular goal was built with the specific purpose of housing the convicts who were labouring on a public works project to build a breakwater. 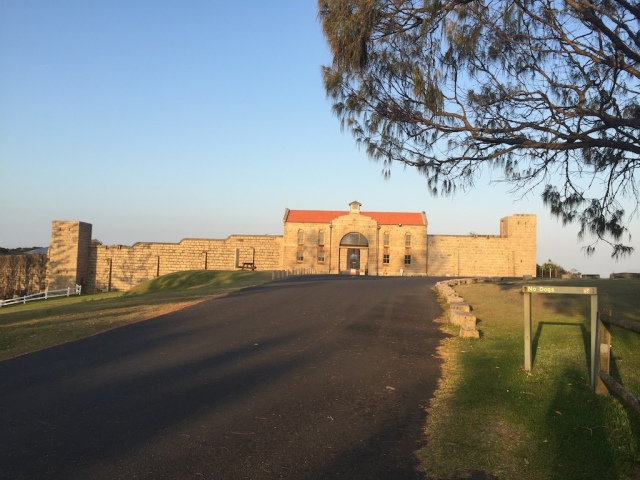 It took 13 years to build the goal and not long after, the whole enterprise was deemed a disaster and the project was disbanded and left to ruin. Several years later, it reopened as an internment camp for foreigners who might (but probably not) prove to be problematic during the war. Trial Bay Goal housed several hundred foreigners, predominately those of German descent, but also from a range of countries. It was a fascinating insight into a history I knew little about.

The setting of the goal looks over the ocean and the precinct had a great walking track which offered double sided views of the ocean on one side, and the more secluded bay on the other. 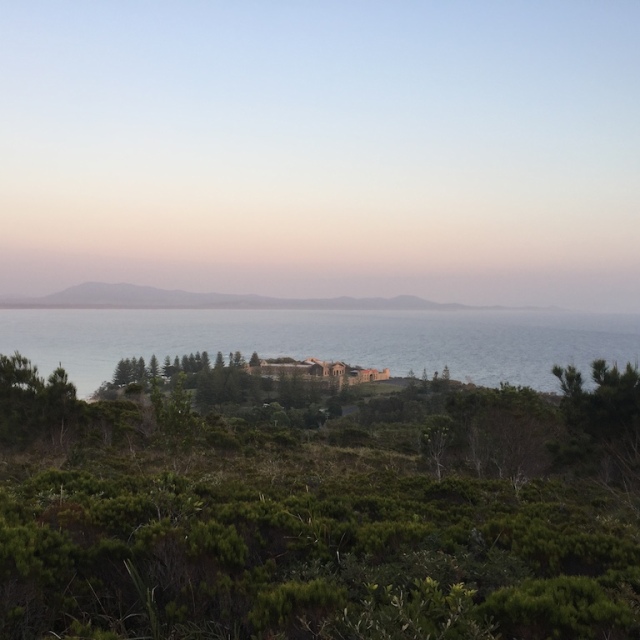 The campground was also home to a family of around ten kangaroos who weren’t afraid to get up close to your van, which I discovered one morning when I woke up early to go for a walk, opened the door and was confronted with a roo less than half a metre from the step! 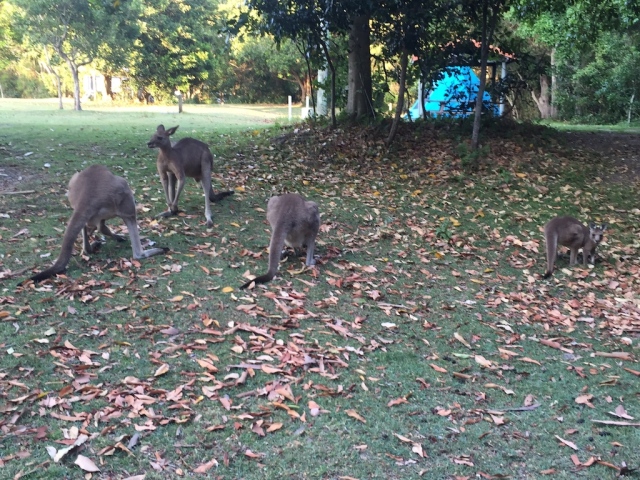 This guy had moved when I stepped out one morning, but they certainly weren’t afraid to come close. 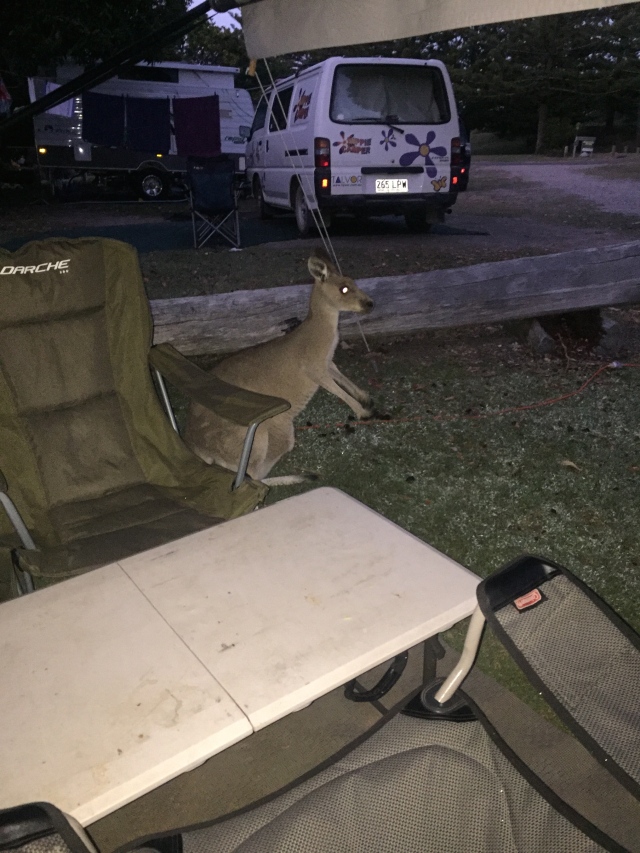 Seems to be the thing around that part, as I met this fella along the track during my morning walk and it was Mexican stand-off for a few minutes until he decided to let me pass. 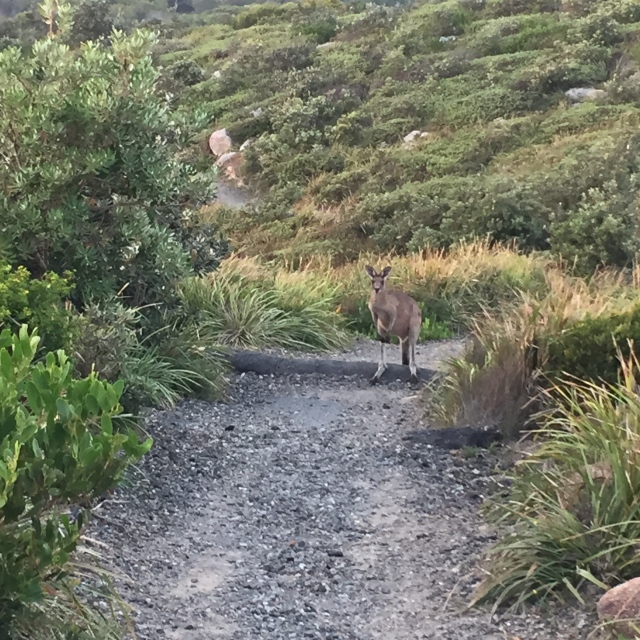 For a change of pace, we decided to head out to Wauchope and to Timbertown, a ye olde village based on the old timber towns of the area. Timbertown was actually a lot of fun and we learnt heaps about the timber industry (which complemented what we discovered on Fraser Island). 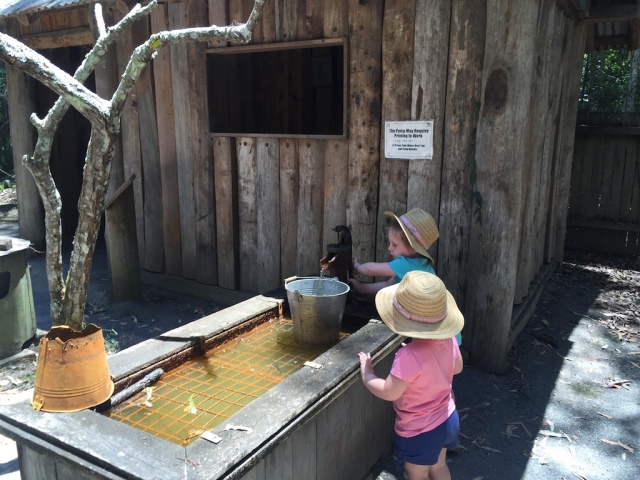 We watched a bullock team pull a sleigh of logs (well, actually we didn’t because they wouldn’t perform for their stand in Bullocky, but we learnt a lot nonetheless). 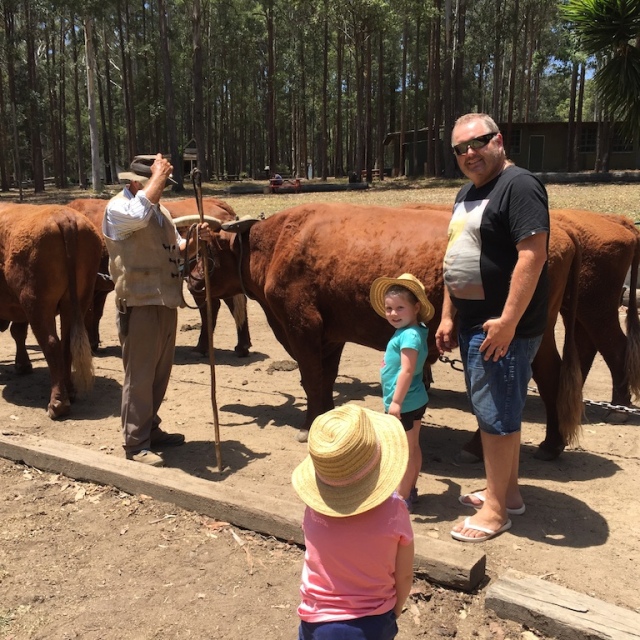 We went for a ride an old steam train and in a horse and cart, and discovered what old houses and businesses back in the day looked like. 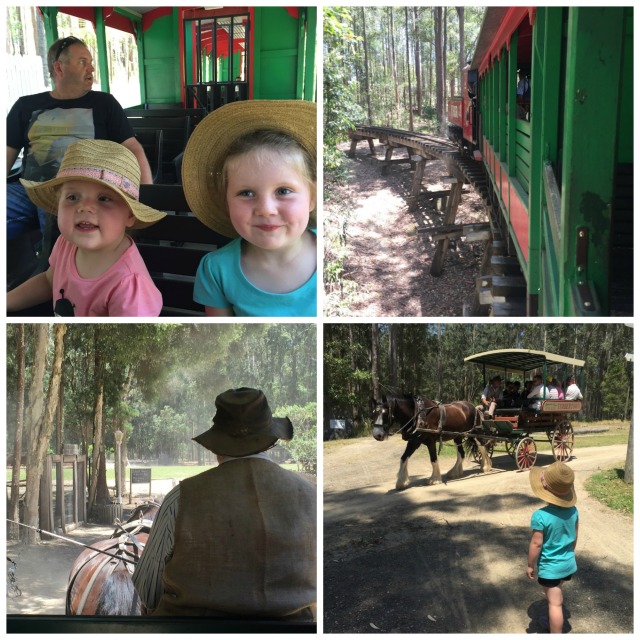 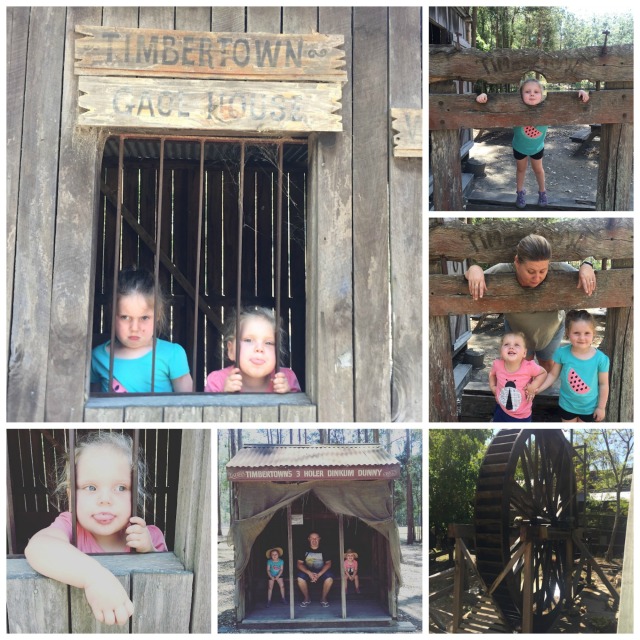 We even saw our Bullocky ride a penny farthing. 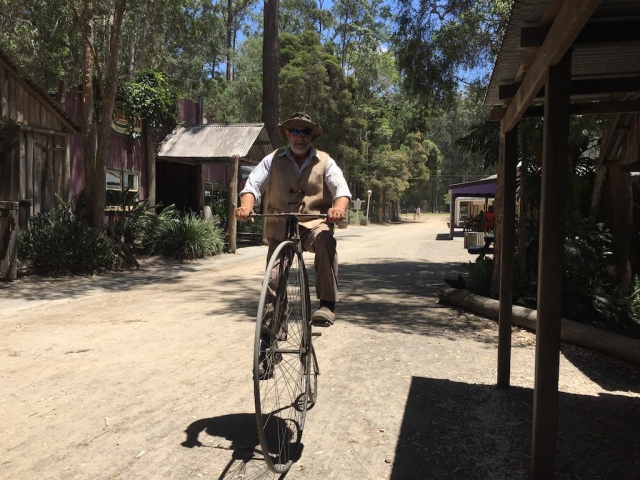 It was good old fashioned, wholesome fun and the girls had an awesome day out. Until we gave them a little reward for being so good and Miss B chucked the hugest tantrum when she got back to the car as she decided she didn’t like the stuffed kookaburra toy she had picked and wanted a puzzle like Miss A had gotten. You win some, you lose some right?

So we headed back to the tranquillity of South West Rocks. The next day, we actually did go up and do the tour of the goal. 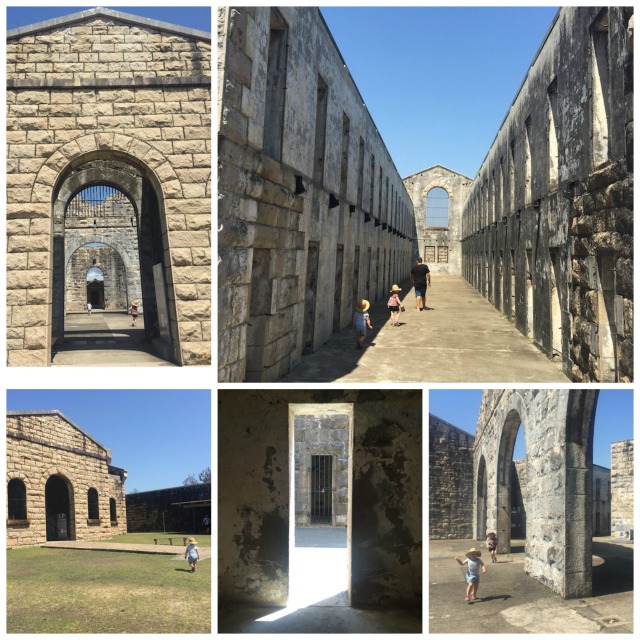 After checking out the goal, we headed off to explore the nearby Smoky Bay Lighthouse which was a steep climb which the girls mastered leading to stunning views of the coastline. 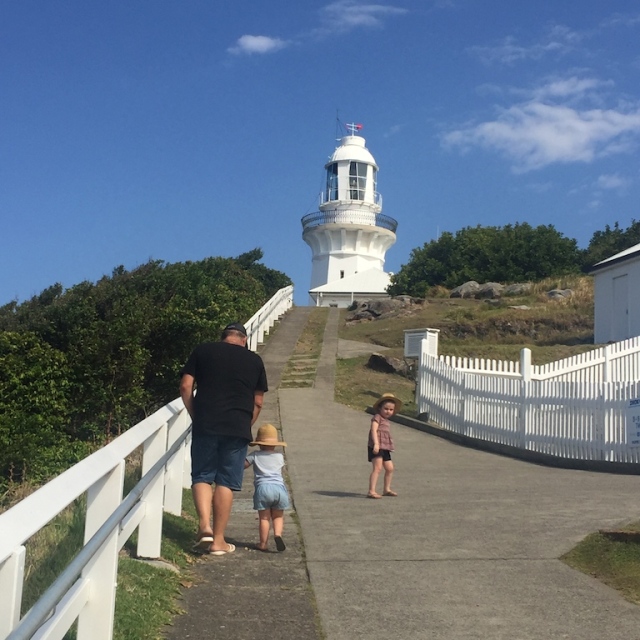 On the walk back to the car, we again ran into another family of kangaroos and I managed to snap this awesome pic before we left. 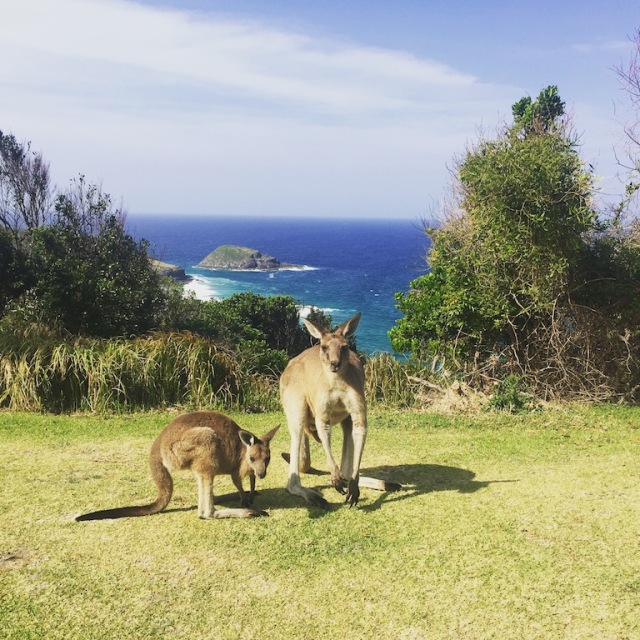 A beautiful place, we really enjoyed South West Rocks and the surprise history lesson that we had whilst we were there!

Do you enjoy learning about the history of the places you visit? Did you know that Australia interned foreigners during the war?