And a mammoth post filled with pics to show it all!!!

Having arrived in Hervey Bay amid dreary skies and rainy weather, we set up the van whilst the girls watched DVDs but before too long, the girls were keen to pull on their gum boots and get amongst it! Our stay in Hervey Bay was a short one before heading to Fraser Island. We stayed at Lazy Acres Caravan Park, because it was super convenient to set up and leave our van on site connected to power whilst we were away and have it ready for us when we returned.

We headed to Fraser on the barge leaving River Heads on the Monday and returned on the Saturday and spent a fabulous jam packed time in between. We spent 5 nights at The Cathedrals in a permanent family tent which was easy, convenient and comfortable. (And affordable, which given we were paying for accommodation on Fraser and van fees in Hervey Bay, Nards-the-tightarse decreed that cheap was the only option!) 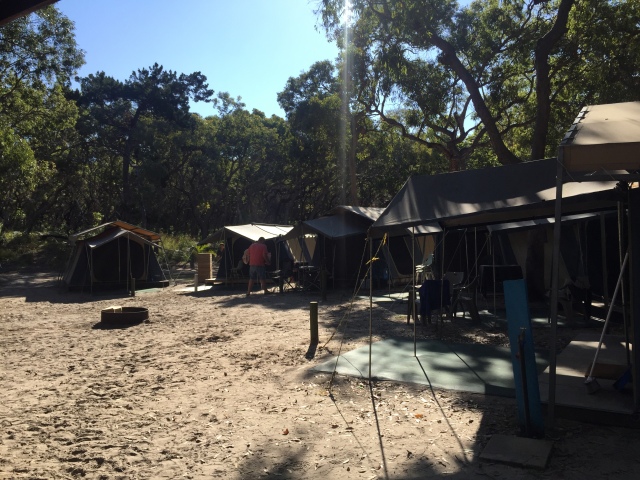 The last time I was on Fraser Island, I was in about grade 5 so my memories aren’t so sharp, other than some vivid memories of Lake McKenzie and the Maheno wreck, the rest is a blur… but this time around, the highlights were plentiful. It’s really challenging to put how awesome Fraser Island is into words. It’s an incredible place and so diverse in it’s landscape across such short distances. One minute you’re on a coastal beach track and before long it has turned into dense tropical rainforest, scrubby eucalypt forests or of course, one massively long white sandy beach. Fraser definitely has it all and more. I know we spammed our social media with heaps of pics of Fraser, but hopefully these pics will help paint more of the story.  Here are our highlights…

Central Station – I could rave about the rainforest on Fraser all day. I loved the trees and the atmosphere in amongst all the palms and pines.  So many different trees ranging from Kauri Pine, Hoop Pine, Scribbly Bark Eucalypts, Satinays, Piccabeen Palms, Pink Bloodwoods, Smooth Barked Apple Trees, Blackbutt and so many more, it was really easy to see why logging was the primary industry on Fraser back in the day.

Central Station was the hub of the logging industry that started on Fraser in the mid 1860’s and continued until 1991 when logging ceased and a Government inquiry was launched into environmental concerns.  The story goes that even the loggers were upset with how badly they had decimated the island. Consequently, Fraser then became a World Heritage Listed site.  You can see from these pics how gorgeous it is now and why it’s so important to preserve it! 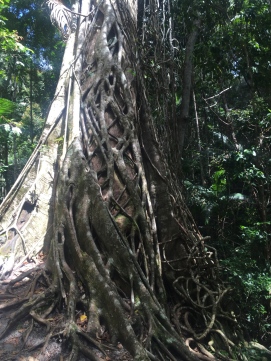 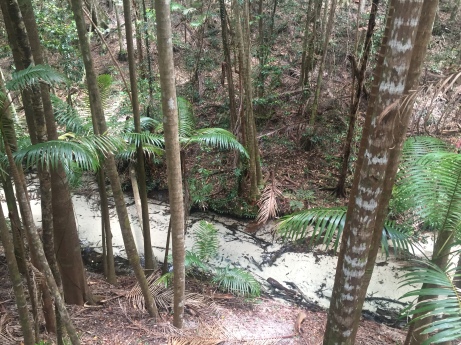 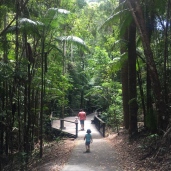 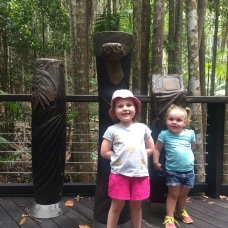 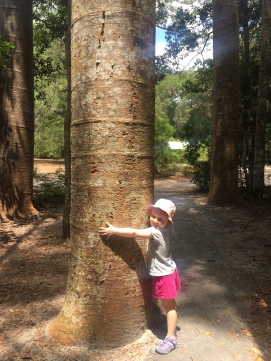 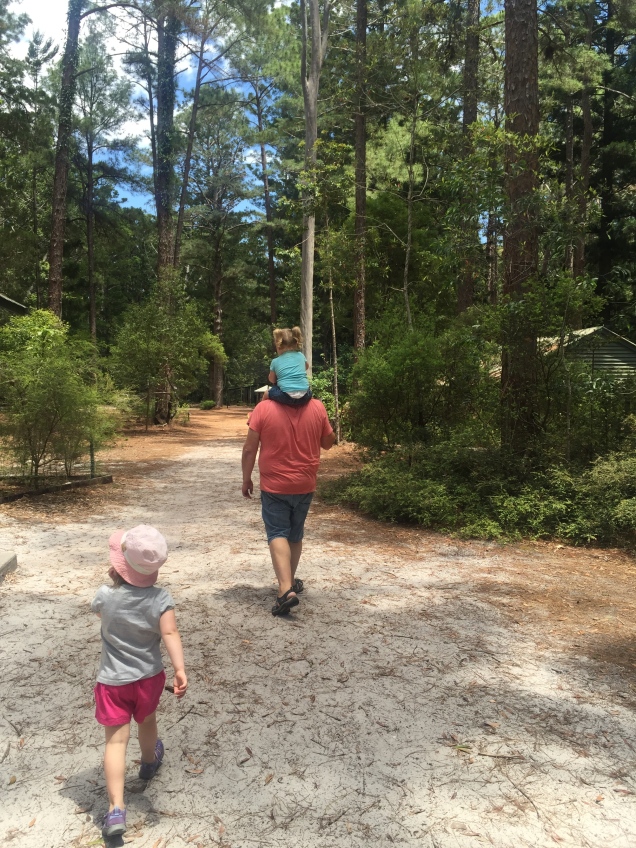 Eli Creek – the biggest creek system on Fraser, it’s a hotspot for tourists who wish to while away the afternoon floating down the shallow creek. This creek flows directly into the ocean and at high tide, can cut access up and down the beach which is why it was so important to get past it at least two hours before high tide!

We spent half a day at Eli Creek and managed to pick a day where it wasn’t super packed with tourists. The girls loved it and even I got wet, which was my first swim on Fraser (the water was bloody cold though!). The creek has the covered forest part and the wide open mouth heading into the sea.  It was definitely worth paying the $15 for the tubes we bought from Big W and the girls had an absolute ball! 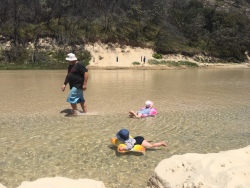 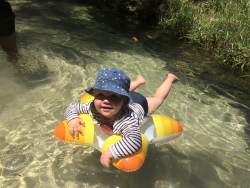 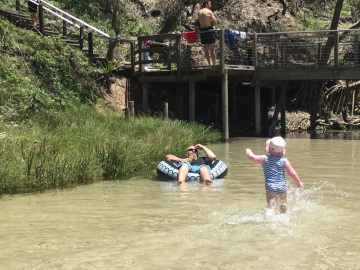 Eli Creek was a highlight for Corey too! 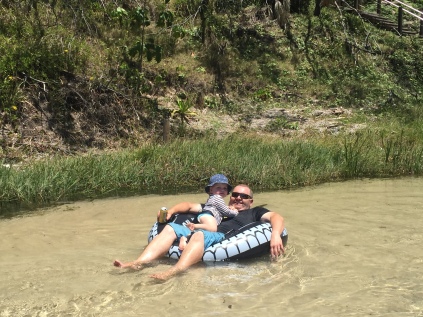 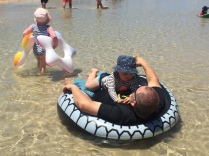 Lake McKenzie – was just as stunning as I remembered and the water is truly incredible. I know everyone raves about how clear it is, but all the pics just don’t do it justice. The sand is so white and when the sun hits the water the aquamarine shallows and dark blue deep water just pops. 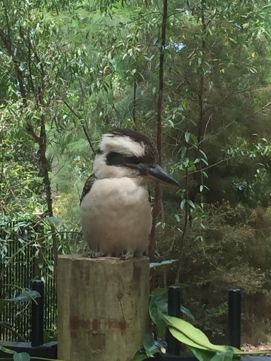 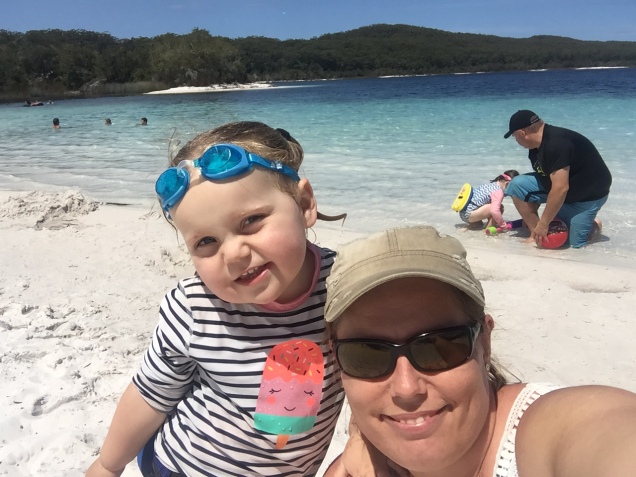 4wd driving…everywhere – Corey loved the 4wding both on the beach and on the inland tracks. The inland tracks were rough though… however, at one point after a very long day, both Miss B & Miss A slept for over 10km of bumpy tracks (poor me ended up with a kinked back from twisting around to stop their heads from flopping around).  All up, we did over 500km whilst on Fraser!

This map gives you an idea of how much ground we covered – we didn’t even see half of it! 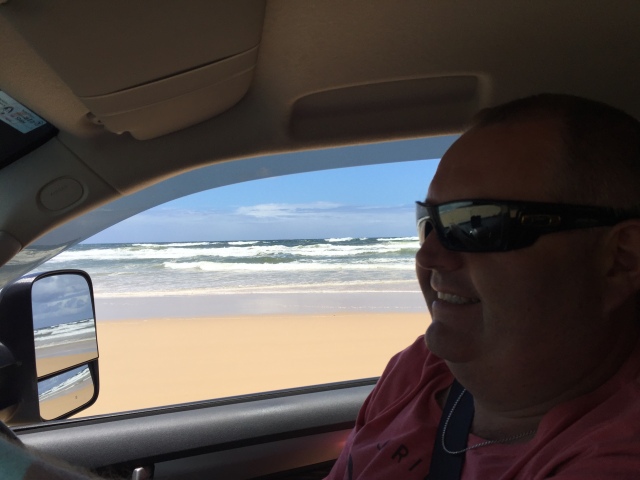 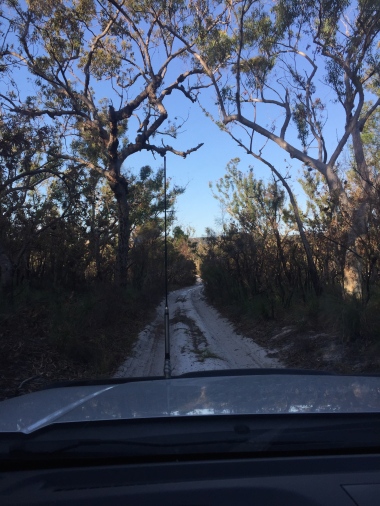 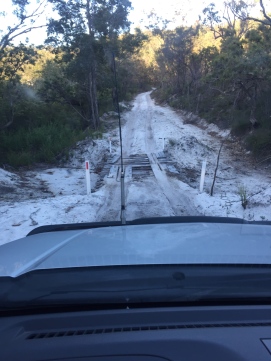 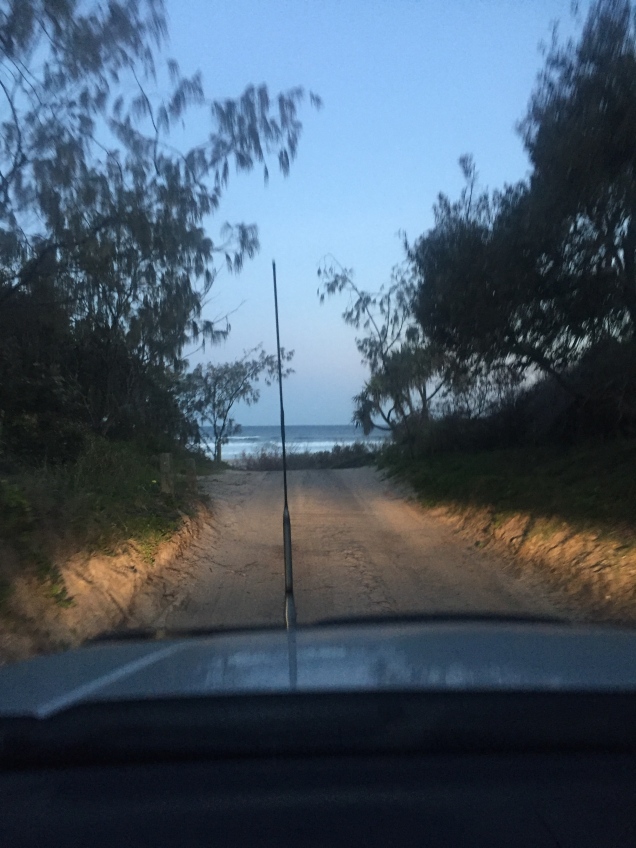 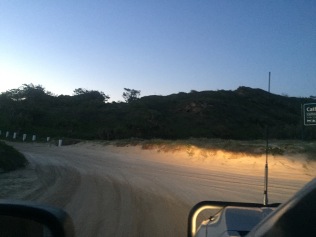 Even I had a crack!

Chillaxing on the beach – We stopped and had lunch on the beach a few times and drank water which ran from the streams into the ocean… and yet not one dingo did we see! (Although our tent neighbours saw one so they were around). 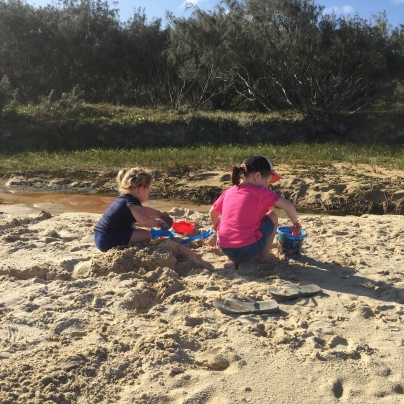 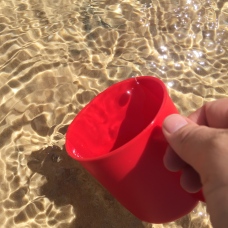 Champagne Pools – Up past Indian Head, this natural pool created by rock is likened to champagne when the waves crash over the rocks and fizz in the pools.  We were there when the tide was a little low to see the full effect, but it’s the best time for littlies to actually go for a swim.  In the pools were little whiting and tropical fish too! 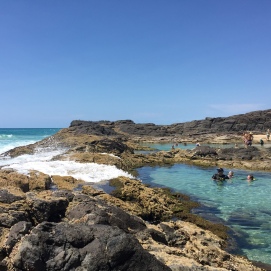 Beach fishing – of course, one of the big highlights had to be catching his first ocean fish! (And rocking his All4Adventure shirt too!).  The two fish were little Darts but they tasted pretty good! 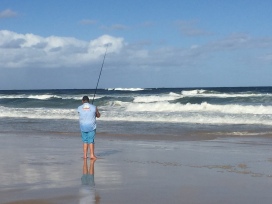 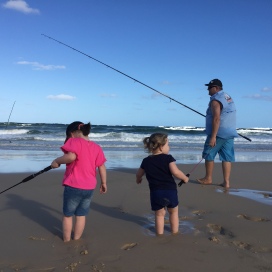 Maheno wreck – I found the history of the Maheno really interesting – I remember seeing the wreck as a kid, but had no recollection of it’s story and didn’t realise it was a hospital ship that was being towed to NZ for scrapping when its tow rope snapped and it ended up wrecked on the west coast of Fraser. After no one was interested in salvaging it, it was determined that it would stay so it was stripped and left there. The Australian Special forces then used it for target practice in preparation for World War 2!! And now it’s a popular tourist stop along 75 Mile Beach!

Lakes that weren’t McKenzie – In addition to Lake McKenzie, we checked out Lake Birrabeen which was also gorgeous (although Corey said it was a bit stinky), Lake Wabby which we saw from the lookout and Lake Allom where we stopped to see the turtles… 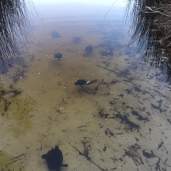 On our last morning, we headed back to Lake McKenzie for another dip – I finally went in for a proper swim and the water was beautiful. Lake McKenzie is also apparently known for it’s jewellery cleansing properties so I rubbed the sand on and sparkled up the gems!  Fabulous way to finish off our trip!

And so ended the Fraser Island adventure!  It definitely got the thumbs up and we will be back!

We returned to Hervey Bay where I caught up on mountainous piles of washing, restocked pantries and fridges before we went exploring around the the local area.

We took the girls fishing off the pier and to the discovery sphere which provides interactive displays about some of the indigenous history, flora and fauna from the region and history of the local area and Fraser and for a grand total of $8 for all four of us, it was a great way to kill an hour or so! 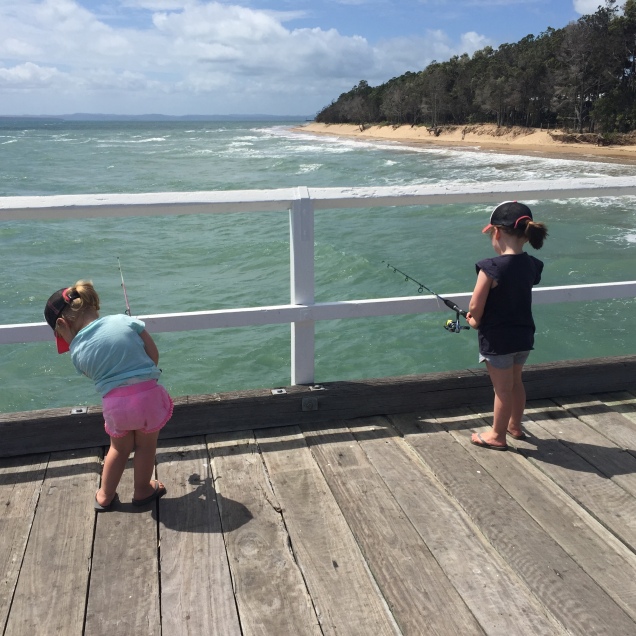 Tonight was capped off with some trick or treating around the caravan park with half a dozen or so kids dressing up and doing the rounds – the girls loved it and it was a really nice end to the day. Hearing them yell out Trick or Treat was super cute and they loved their first full-on Halloween! 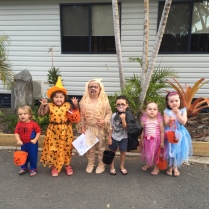 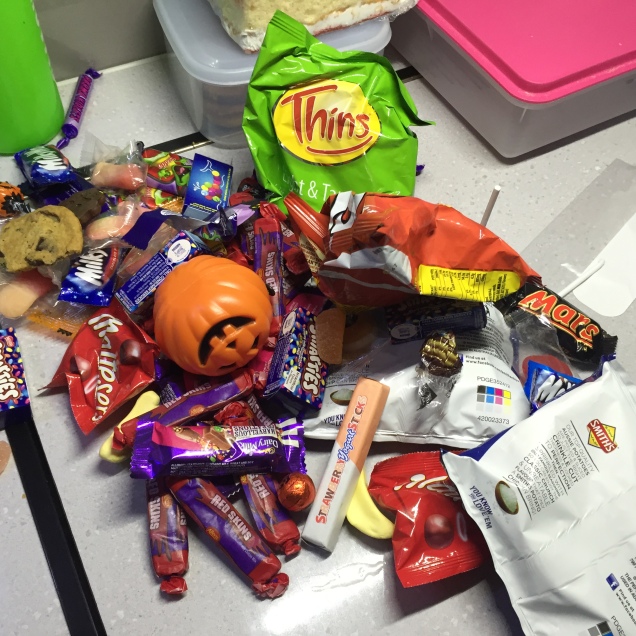 Have you ever been to Fraser Island or Hervey Bay? If so, what was the highlight of your trip?

3 thoughts on “Our mammoth Fraser adventure”