Today is R U OK day.  An initiative designed to start a conversation and check in with your mates to make sure they’re ok and that they know, you’re there to listen should they need a friendly ear.  I’ve been supporting this concept for a few years now and am always heartened to hear when this one little question actually makes a difference in someone’s life. 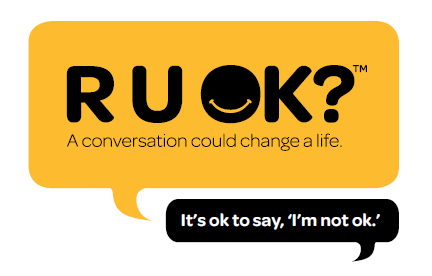 I know in the past, I’ve been guilty of trotting out the ‘I’m really good thanks’ answer when people ask me this – not just on this day, but any day that I’m asked.  I’m known for being ‘ok’ all the time. It’s the image I portray and it’s the persona that people know.  But not surprisingly, because I’m human and all that, there are times where I’m not ok.  There were days over the past two months where I’ve not been ‘really good thanks’.  And for the first time in pretty much my entire life, a few people saw that I wasn’t ok. Why do we do that? Shut ourselves off and pretend that things are hunky dory? I’m a master at it, and I’m very much aware of my capacity for being emotionally challenged.  But for me, some of the emotions and the hurt were to big to mask this time around and so the guard was dropped.

Today I asked a few friends if they were ok and got some honest answers, I do have some friends struggling out there. And I reminded them that I’m here to support them.  And when they asked me if I was ok in return, I was honest back.  Well, my response was more honest than it normally is, in that I replied that I was much better than where I was a month ago. I didn’t elaborate and those who experienced me back then got it, and those that hadn’t I suspect just put it down to changes in the workplace.  But at least it was honest.  Normally I would have said that I was fine and moved on.

I definitely feel as though I have turned a corner but some days I just shake my head in disbelief at it all.  I’m struggling with a workload of three and more pressingly, a feeling of overwhelm that is sometimes paralysing. There have been times where I just sit blankly at a screen wondering what and how to do the next thing.  But other than that, I think I’ve come out of the worst of it now and that I’m ok.  In fact, I told someone today that I had my eye on the prize and that’s the way that I’m choosing to look at the world.  I have a plan and one day, hopefully soon, this will be me:

And maybe eventually I can put all of my attention into doing that one day.

So thank you to those who asked, yes, in the right here and the right now, things are ok and I’m ok too.  So how about you? R U OK?

Have you checked in with your mates to see if they are ok today? Do you answer truthfully when someone asks you?