We arrived at Katherine to a barrage of signs and posters advertising fireworks for sale – one day only! We then realised that we’d hit Katherine just in time for Territory Day! Territory Day seriously boggles my mind as it’s the one day in the NT that people can legally buy fireworks and set them off in the streets.  Technically, Territory Day is designed to celebrate achieving independence as a separate Territory from the Federal Government but it seems that it’s all about the fireworks!

But before we enjoyed the cultural festivity that is Territory Day, we hit the Katherine Hot Springs and spent a few hours enjoying the warm clear water.

That evening, we made like a local and head to the showgrounds to participate in the community celebrations, where we were definitely promised fireworks.  A vibrant atmosphere, I found the experience interesting as I tend to go to these things with my Event Coordinator hat on, spotting all the things that are amiss… one of the things we’ve noticed in WA and NT is that OH&S doesn’t seem to be as stringent here as in Victoria so my brain was pinging with all the things that I noticed.  The production on stage told the story behind Territory Day and you could see that it was an entire community effort with many groups and clubs taking part.

We watched the show and soon after, the fireworks.

And as we were leaving the venue that’s when the fun began.  The town was being lit up like it was under a bomb attack.  The park opposite the showgrounds was a base for people letting off their fireworks – most of them going upwards, but often you’d see one fall over a shoot horizontally across the ground, with people jumping out of the way.  We decided to go to Maccas to get some dinner given there was only one food stall at the community event and a queue a mile long. Of course my event brain was full of questions but we found out that three vendors cancelled at the last minute. 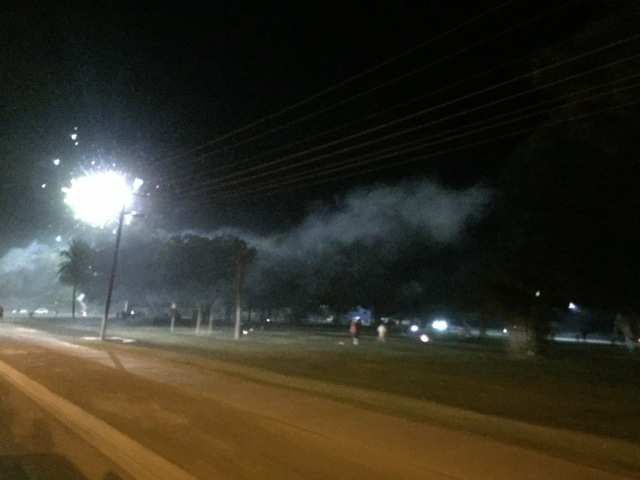 After dinner, we took a drive along the streets, often having to turn around as the street was blocked due to people letting off fireworks.  It was a fascinating insight into the Territory culture. Kids, adults and everyone in between were participating. As we drove home we’d see random bursts of fireworks come from every side and even as we jumped into bed, the odd crack of fireworks would sound off from around us.

The next day, we decided to check out Nitilmuk Gorge (aka Katherine Gorge). We had agonised about whether or not to shell out for a gorge cruise and in the end, decided against it.  To be honest, we were a little gorged out and couldn’t justify spending $300 when there were still other tours in Darwin and Kakadu that we wanted to do. So we did the walk instead which allowed us to see a tonne of fruit bats and the entrance to the gorge.

And that was pretty much our time in Katherine done.  The afternoon was spent shopping for groceries and fuelling up ready to hit the road in the morning!

Have you every experienced a Territory Day? When travelling, do you get a little ambivalent about going to similar attractions (like gorges)?