After nearly a week spent in the Flinders Ranges (including an extra day more than anticipated), it’s now time to move on. This is a place that we will definitely come back to although I suspect that there will be many places on our trip that we will vow to return to one day!!

We ended spending a night of free camping just out of Hawker on the fringe of the ranges and then five nights at the beautiful Willow Springs Station as our base so we could explore the region. 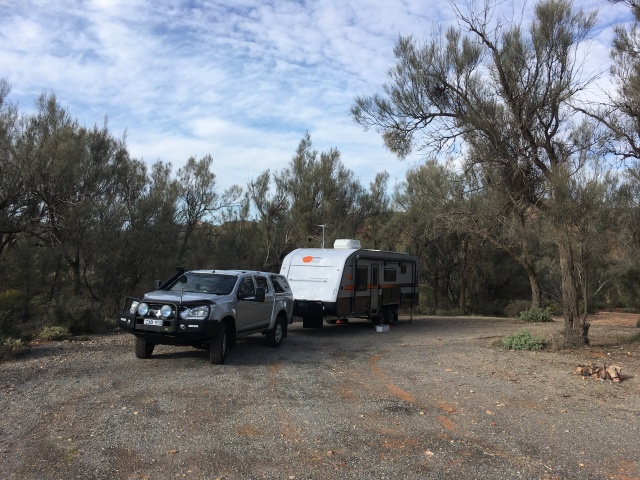 There are not too many things in life these days that make you really exclaim with surprise and wonder, but the Flinders Ranges certainly evokes that response. It’s really amazing to see such diversity in the landscape within short distances of each other and when the terrain is over 500 million years old, there is certainly a lot of variation to explore. Sheer cliff faces of sedimentary rock, layer upon layer all slightly different in colour and size to create a craggy, variegated vista.

Our few days of exploring including stopping into the Wilpena Pound which is a natural amphitheatre and the tourist hub of the Flinders Ranges National Park. Here we picked up our 7 day National Park pass which allowed us to explore a heap of gorges and driving routes.

The next day we packed our snacks into the ute and headed off to explore the National Park which includes the Heysen Range and the beautiful Bynyeroo and Brachina Gorges. We stopped for a snack at Brachina Gorge and found a family of Emus having a dip in a puddle!

As we finished the dirt track through the gorges we headed out of the National Park and back onto the sealed road headed for Parachilna, a small town which pretty much consists of a pub. One of the things that has impressed me most here is the diversification of local pastoralists and business owners in creating unique tourism experiences. Parachilna clearly only exists now due to tourism and the Praire Hotel generates this tourism by their unique offering of their ‘Feral Mixed Grill’. And providing a real taste of the outback apparently works with vehicle after vehicle arriving for lunch.

With a meal of kangaroo, emu and camel (for me), a kangaroo burger (for Corey) and chicken strips and wedges (for the girls) under our belt, we headed back onto the dirt track towards Blinman, a small copper mining town. By the time we’d arrived, the girls were asleep so we continued on and decided to pop into the Appelinna Ruins which were the remnants of old stone cottages and the story of the dispute between pastoralists Joseph & Sarah Wells and the Blinman Copper Mine who were fighting over access to the main source of water which was located on the Wells’ lease of land. Step by step we walked through the history starting with the Wells’ stone walled cabbage patch, through their small homestead made of poorly masoned stones.  Whilst exploring the homestead, the fields came alive with over a dozen Yellow-Footed Rock Wallabies and 8 emus wandering the field behind us.

I’ve seen many wallaby, kangaroo and emu in my time but this area is just covered with them – everywhere! Miss B was enamoured by the wallabies and loves the emus so we walked towards them to have a closer look.

We continued then to wander through the ruins, walking across the dry creek to the ‘miners’ side of the settlement where there were some more professionally built dwellings including mine manager’s hut, the cook’s hut and what is presumed to be a blacksmith’s hut. We even saw a spiny-backed skink basking in the sun.

The afternoon was topped off by a visit up to Stokes Lookout to check out the sunset – but as we didn’t anticipate heading up here, we didn’t have the girls’ jackets with us and only stayed for a few minutes.

Stokes Lookout is one of the few places within the Flinders Ranges to get mobile reception so we checked the weather and saw that an anticipated 20-40mm was to come through the next day which was worrying as we were planning to do the renowned Skytrek on Willow Springs Station. Willow Springs Station is a 70,000 acre sheep property located approximately 20km from Wilpena Pound. Skytrek is an 80km loop of Willow Springs which takes around 6 hours to complete.

With a very well thought out guide of 50 markers, containing history and key points of interest, the diversity of the property was truly gobsmacking. From peaceful little springs tucked away in little valleys, to craggy outcrops and rocky mountainous terrain on one side, then flat, arid, dusty land on the other side of the range and back into extremely rocky and steep hills and cute little creeks again. Some points of highlight included old Moxon’s Hut, Aboriginal etchings, ochre cliffs and some of the highest points within the range. 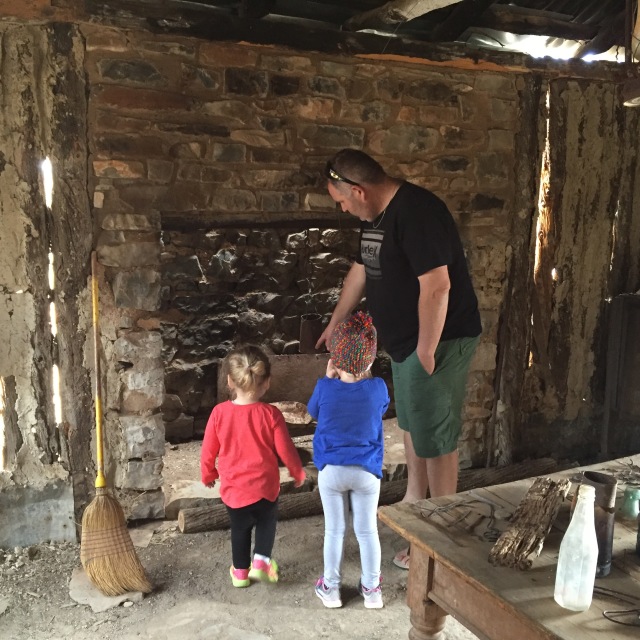 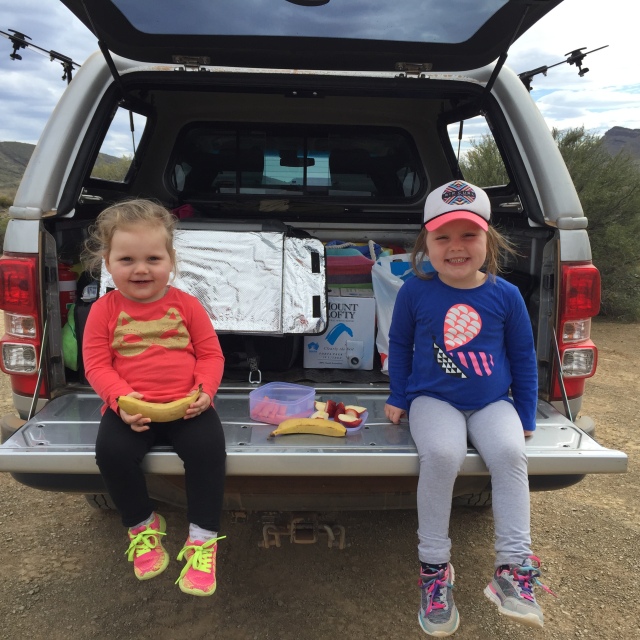 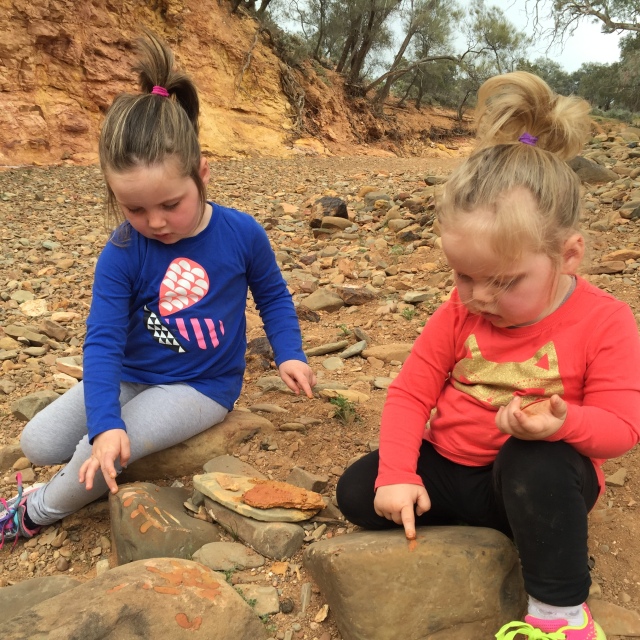 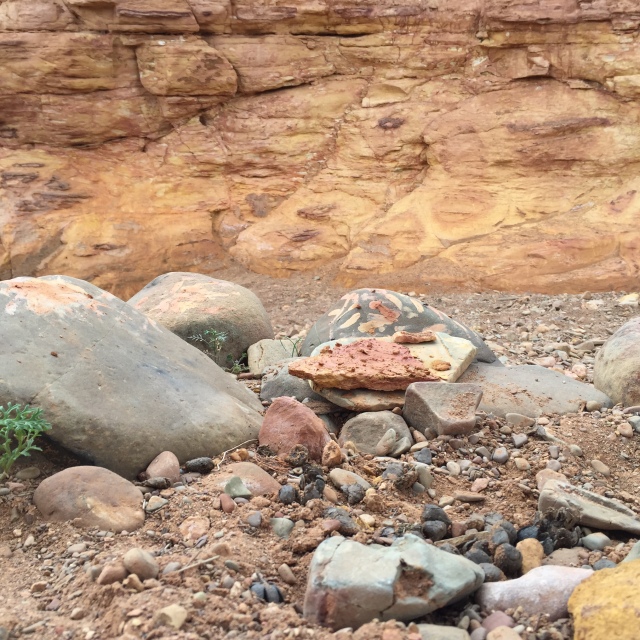 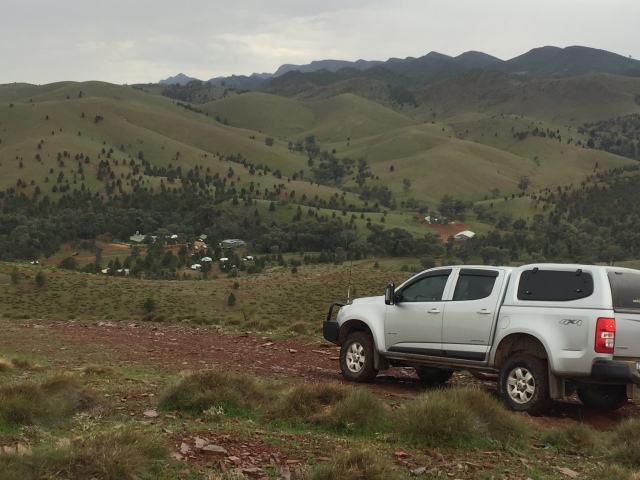 A definite highlight of the trip and Corey’s pleased that our van and ute no longer look new!

The next day was a rest and laundry day and where our time here began to turn a bit pear shaped. Whilst driving on our National Park tour, the brake fluid light came on again and when Corey checked it, the fluid levels had dropped significantly. We did a drive out to Wilpena Pound after the owners rang ahead to see if they had any brake fluid in stock.   On Friday afternoon, Corey was pumping up tyres and checking things over and felt that the bearings in the front right hand tyre weren’t quite right, so again, after having a chat to the owners (and the visiting grader contractor), we were booked in to see a mechanic in Hawker, over 70km away.

Turns out there is a significant issue with a leak and our clutch which the mechanic cautioned us was a safety risk and we needed to get it addressed asap. Annoyingly, Corey had raised the issue with the clutch and the brake fluid with our local dealer back home and we were told everything was fine so after a call to our dealer back home, and a disappointing response, we ended up staying another night at Willow Springs Station (certainly no hardship there!). Despite being low on water in the van, we still had plenty of food for another day or so and decided to make the best of it.

We headed back to explore Wilpena Pound in more depth, which was another awesome day out. 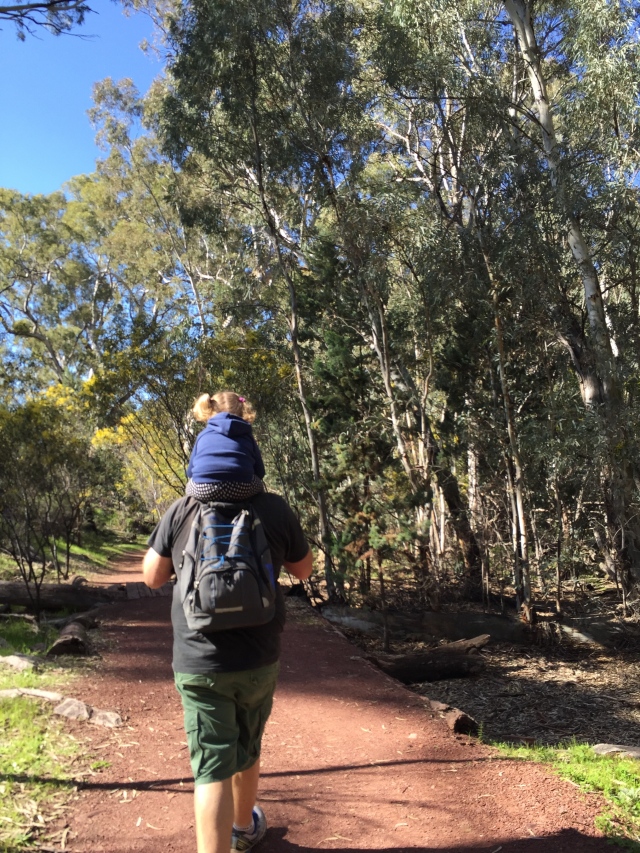 Now, we’re tucked up in bed back at Port Augusta ready to turn up on Holden’s doorstep first thing in the morning!

There is talk that this fix may take 3 days to resolve, parts pending, so we could be in Port Augusta for a while – and given it wasn’t ever on our itinerary, we seem to have spent a bit of time here!

Have you ever been to the Flinders Ranges? What place have you visited that has made you exclaim with wonder?

2 thoughts on “Farewell Flinders Ranges… we will return!”