It never ceases to amuse/concern me how people are so quick to outrage on social media these days.  My Facebook and Twitter feeds this evening have been clogged by the recent atrocity that Miley Cyrus has committed.  And by atrocity I mean Miley just just being Miley in a TV appearance on Jimmy Kimmel.

Ok, so atrocity may be too strong a term however you’d never guess it judging by some of the vitriol playing out about this trending topic! Yes, she’s courted controversy yet again.  But she hasn’t killed anyone, people!  She’s simply evoking the reaction that she orchestrated.  That she was expecting!

So, why do people still continue to get so hot and bothered about it, I wonder?

Me personally, I just don’t get why anyone cares any more.  I certainly I don’t, although good luck to her I say.  If I could get away with wearing pasties on my nipples whilst swanning around in a sparkly sequinned cape then you know what, I’d probably give it a crack too!  And in all honesty, in comparison to 80/90s Madonna, Miley is not doing anything that hasn’t been done before, don’t you think?

Yet, it is still a thing.  It’s still creating controversy and enraging the masses.  The thing that worries me most, post this recent public display of Miley-ness, is the passionate and heartfelt nastiness that follows.  Quite frankly there are some seriously unhinged and disturbing people out there.  When you break it down, there’s no question that it’s an extremely calculated move on Miley’s behalf (after all she was promoting the VMAs), but does it really warrant the nastiness and blatant judgment that people are quick to trot out?

Of course it doesn’t.  She is, as far as I’m aware, a real human with feelings too so from that perspective alone, it boggles my mind some of the crap that people write and post in retaliation.  But the thing that really surprises me is who could be bothered.  What compels people to actually expend the energy and draft something, nasty or otherwise, and send it out into the ether? To engage in debate that inevitably ends with someone looking ridiculous. Surely there is better shit people could be doing?? Right?

And more importantly, surely were starting to get exhausted by the extreme judgement and negativity that is just a constant part of our social environment these days?  I know I am!  It makes me just want to switch off.  (Except I do believe I would actually die if someone made me do that – yes, my name is Nardia and I have an i-anything addiction).

I know it’s easy to cast judgement.  It’s easy to have an opinion and everyone, including those people who think they don’t, make judgements about everything, everyday.  But I’m actually grateful for this latest Miley incident because it reinforces for me, the importance of practicing restraint and keeping my own judgements in check.  It’s one thing to think a certain thing, but in my opinion buying into pack mentality does not an attractive quality make. 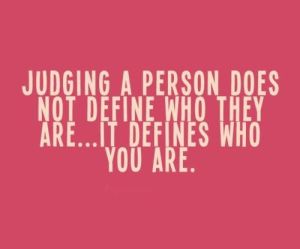 Are you finding that social media is becoming increasingly built upon judgement and commentary that would never be said to someone’s face? Have you ever considered a technology detox?