When I was a little girl (in grade five to be specific), I did a project on the crossing of the Blue Mountains. I remember getting my big piece of poster board and cutting and gluing pictures of Blaxland, Lawson and Wentworth onto the card, and writing up a description of their expedition and drawing a map of where they went. Ever since that time, I’ve always had a soft spot for the Blue Mountains, and having finally had the opportunity to explore it, I wasn’t disappointed.

We based ourselves out at a free camping area called Lake Wallace, just out of Lithgow in a little village called Wallerawang. It was a beautiful little spot which had hot showers and a fabulous vista of the lake. 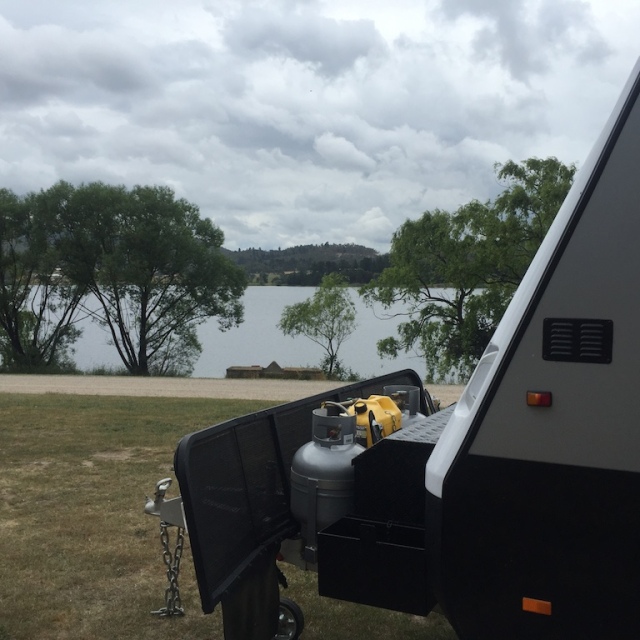 Knowing that we wouldn’t be able to do a lot of the bigger bushwalks, we decided to splurge and spend money on a ticket to Scenic World. The girls got in for free and the total cost for Corey and I was only $78 which when you compare to some other attractions we’ve been to, is definitely a fair price for what you get. 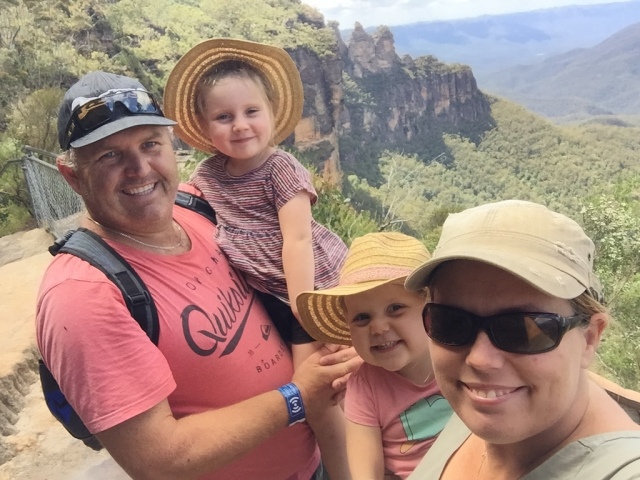 There are four components to Scenic World:

Skyway – a cable car that takes you across the Jamison Valley to the other side where we hopped off and did a fairly easy, but very wet walk to several lookouts which had awesome views of the Three Sisters before heading back over to Scenic World on the other side.

The girls loved this ride and we were able to stand on a glass platform and look down at the valley below, seeing the Katoomba Falls and the top canopy of the rainforest. 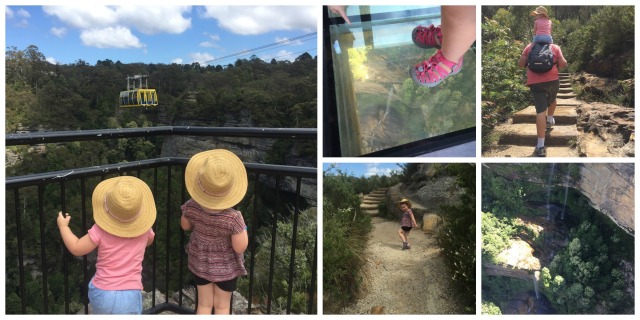 Railway – a 52 degree angle (that’s very steep!) railway ride that goes up and down (to the soundtrack of Indiana Jones). We headed on the railway to get down to the bottom of the valley but even though we knew we were going down a hill, we were not expecting it at all. I remember briefly seeing the sign that said 52 degrees but maths is not my strong suit so it did not compute in my head at all. Once you’re in, you go through a pitch black tunnel and come to a crest before it plunges down a short, but insanely steep decline – the girls weren’t sure what was going on at first, but by the end they were laughing their heads off! It was so awesome in fact, that we made sure we went back up the hill again (downhill was definitely way better!). 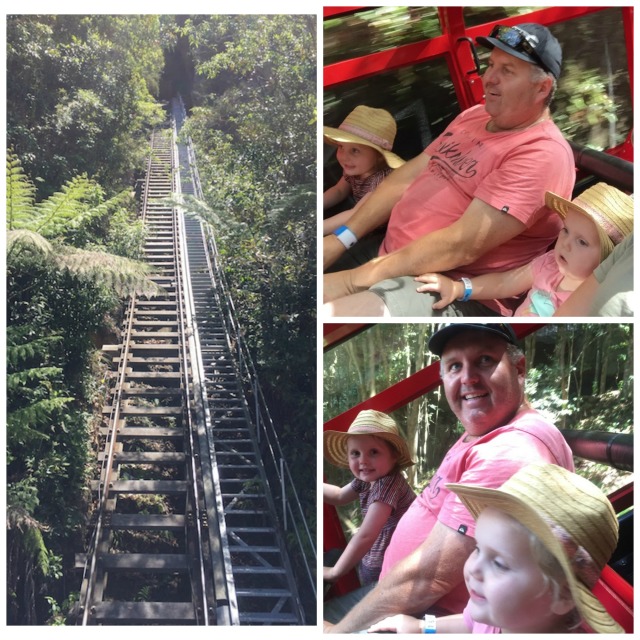 Walkway – a series of boardwalks covering 2.2km of meanderings through the rainforest and imparting the history of the coal mine that used to operate on the site (and hence the reason for the railway, and the second cable car which I’m about to mention). It was a beautiful walk and Miss A nearly made it all the way before needing to be given a piggy back.

Cableway – an old cable car system that was originally used to transport coal from the bottom of the valley to the top. It’s now obviously a ride and we took it to the top of the mountain, stayed on the ride and headed back down. It provides an awesome view of the valley and also of the Three Sisters and Orphan Rock, which used to be the most well known landmark in the area until the tracks and lookout were closed in the 70’s due to safety issues (erosion). 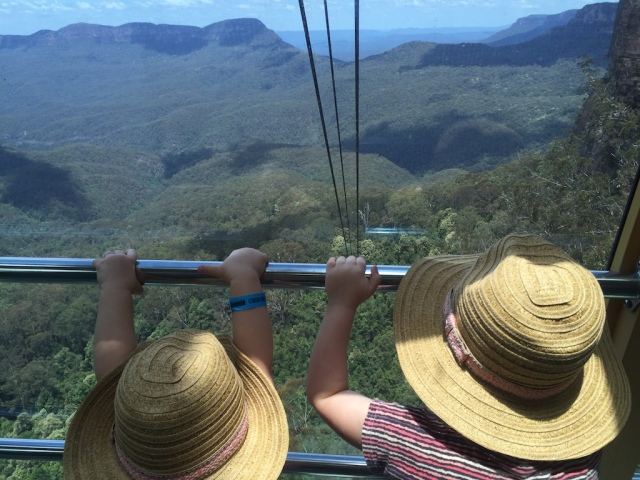 So a massive thumbs up to Scenic World and the awesome opportunity to experience the Blue Mountains in a kid friendly way! After we finished up there, we headed across the other side of the valley so we could get a closer look at the Three Sisters (the three little peaks to the left). 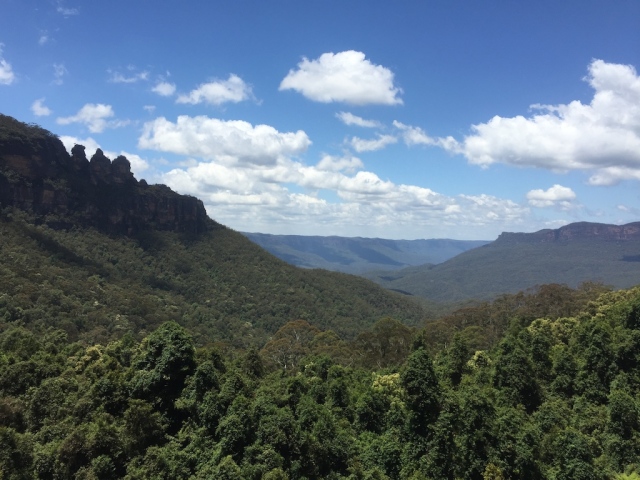 And, if you look closely, you can see a little bridge between the main peak and the first ‘Sister’. 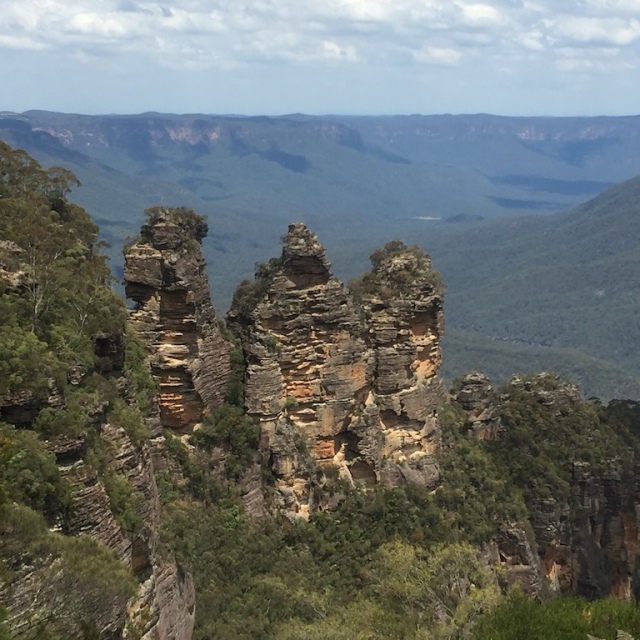 We ended up doing the walk to get around to the Three Sisters and the Honeymoon Bridge which is the little bridge between the main ridge and the first ‘sister’.  And it involved a ridiculously steep set of stairs. But the girls did it and the people we held up didn’t seem to mind. 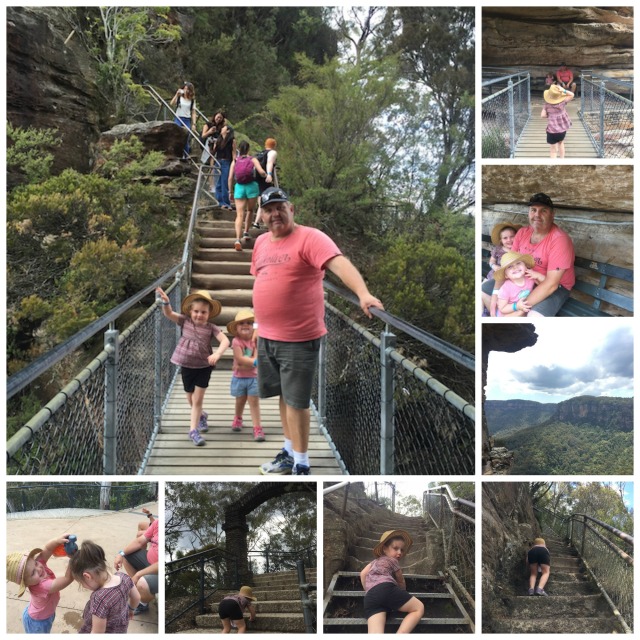 The girls were glad to get back to the car but we were happy to say that we did it! 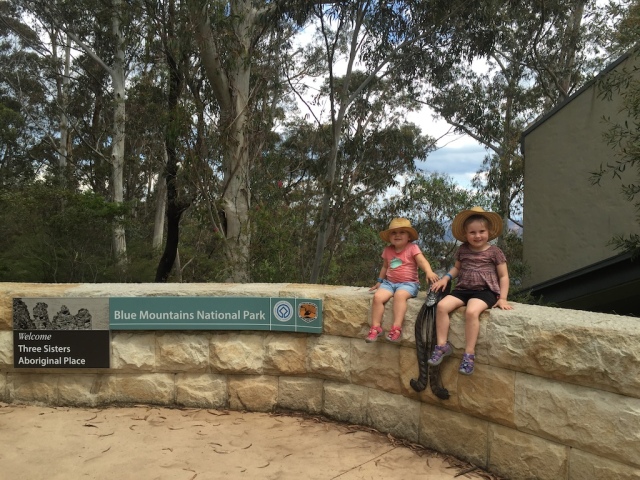 One of the funny things whilst we were at Scenic World and when we went over to look at the Three Sisters were the Asian tourists.  They LOVED Miss B and Miss A.  They were constantly taking pictures of them and on several occasions we were asked if they were twins (I think our ‘twin count’ for this trip is up to about 18 – true fact!). I took this sneaky pic of this lady who was so excited to get a picture of the girls – what I couldn’t capture were the 8 or 9 people actually taking a picture! 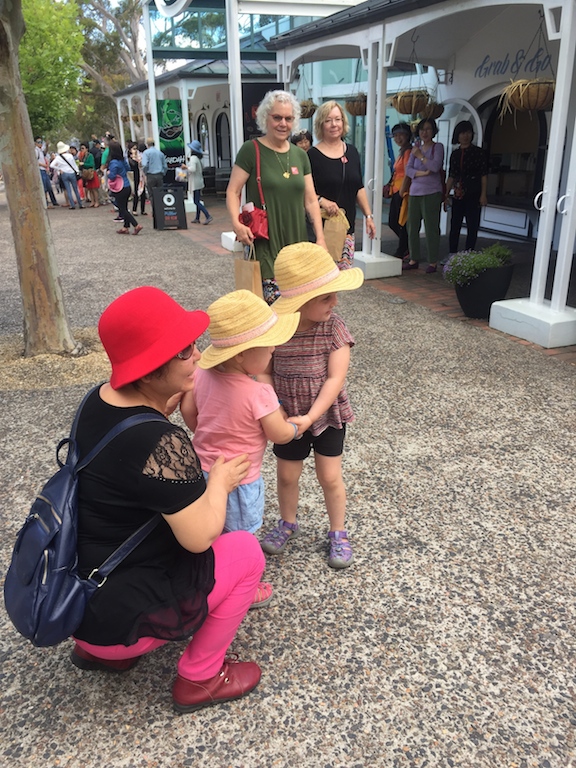 The next day we mixed it up and headed out to the Lithgow Glow Worm Tunnel. Other than knowing it was a tunnel… and it had glow worms in it, we weren’t really sure what to expect.

We headed out to the Newnes Plateau in the Wollemi National Park on one of the roughest and rockiest tracks we’ve been on. It took us about an hour to drive the 24km to get to the tunnel. Along the way we saw a herd of what we presumed were brumbies, as the land was all logged forestry and not really suitable for agistment. 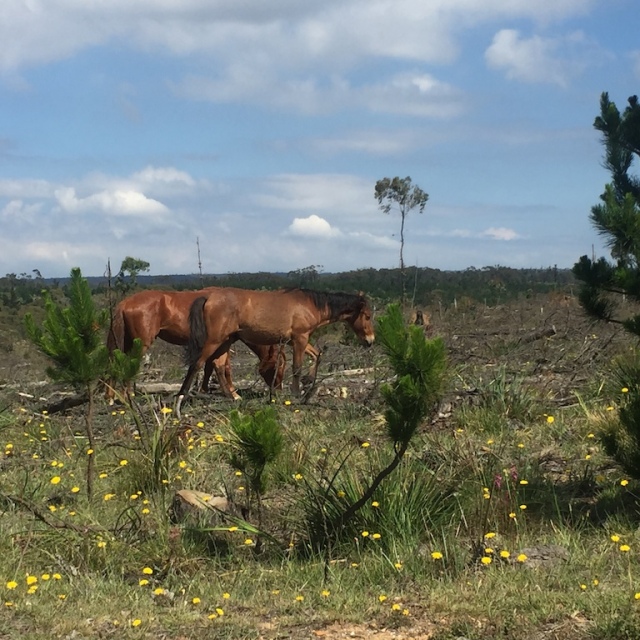 On the trip out, I read that the tunnels were originally constructed for a railway line to an oil shale works at Newnes. The track and tunnels were constructed but were done so with very steep grades and sharp curves and a couple of narrow squeezy spots. After about 30 years, it was dismantled and tourism got the benefit.

There are two abandoned tunnels, one of which we drove through and the other which is full of glow worms. 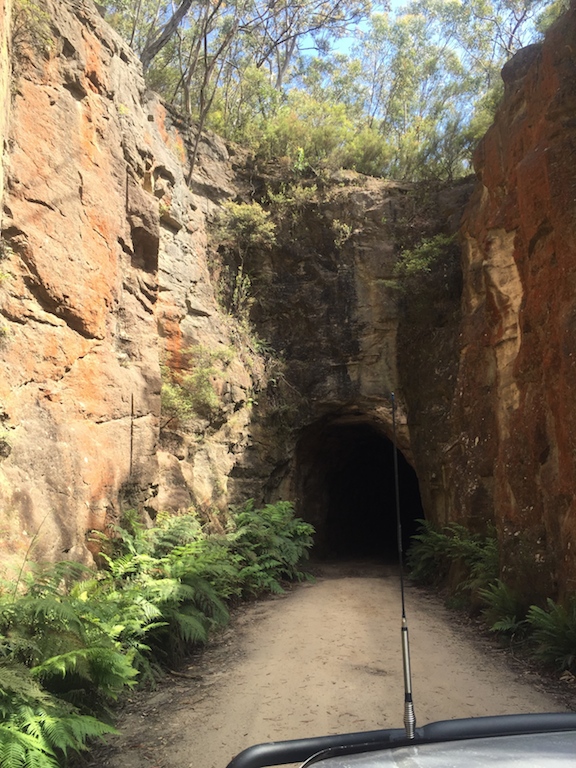 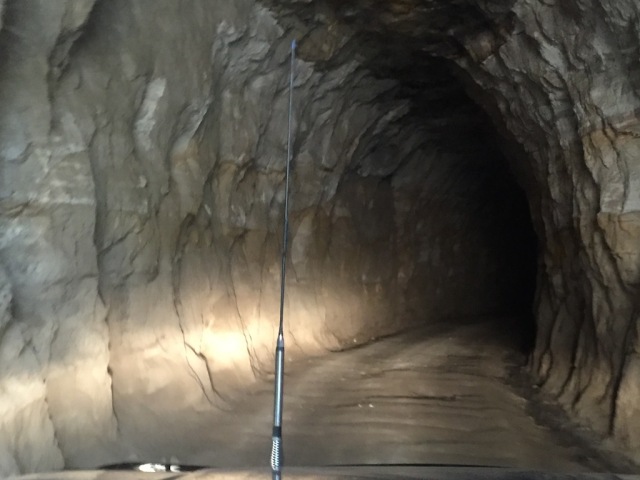 After a 1km walk along a series of leaf-littered pathways, steep stair cases and gnarly tree-rooted dirt tracks, the tunnel appears behind a lush curtain of ferns and trees. 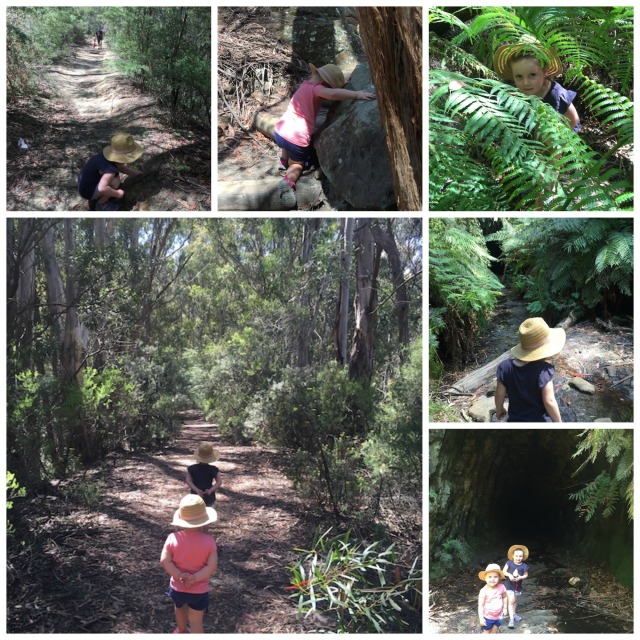 It is 400m long and curves around nearly 180 degrees (or so the brochure says) and becomes pitch black about 50m into it. You can walk right through to the other side and there is actually a longer walking track coming from the opposite direction, but it was a 5km track along the original railway track one way so we weren’t about to do that with the girls (knowing we’d need to carry them by the end). So we took the easy way in, walked right through and had morning tea at the other side. In the pic, bottom right, if you squint hard enough, you can see some glow worms! 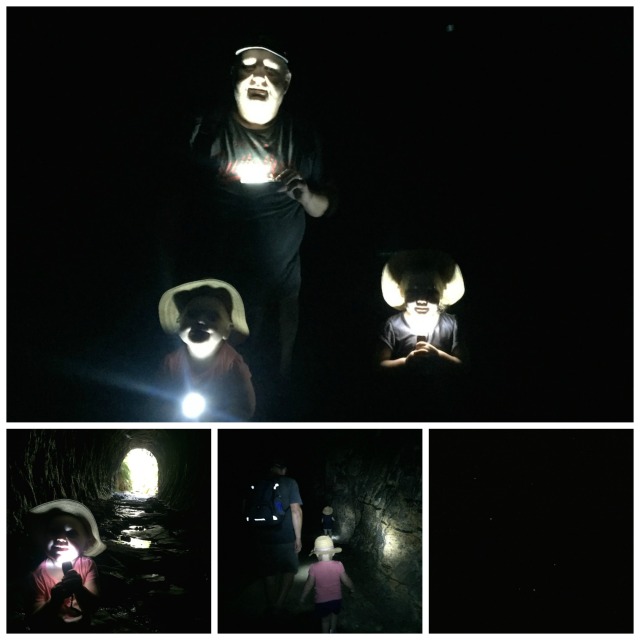 The floor of the tunnel is old rubble from the dismantling of the tracks and there is a little stream that runs through it making for an uneven walking surface. Couple this with pitch black darkness (well, that and the glow of the worms which are of no use in a navigational sense) and it took us a while to get through it. But the girls absolutely loved it! 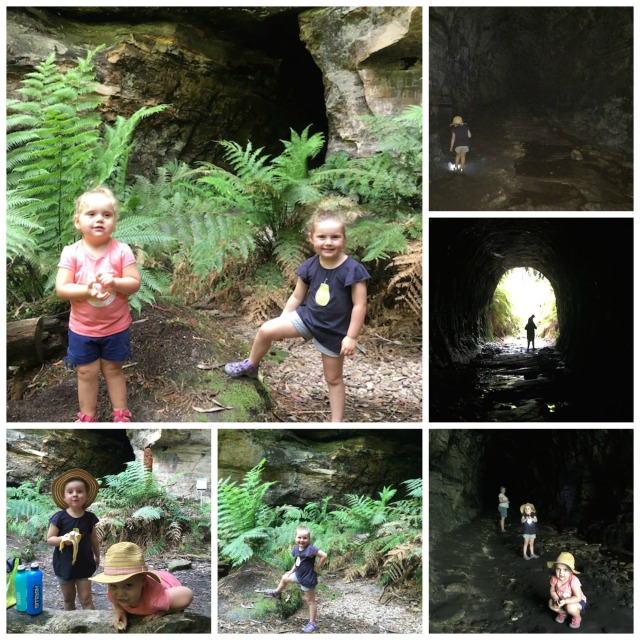 And although we had to carry them both back (pretty much once we got back through the tunnel), we had an awesome day. We ended up having 2-minute noodles back at the carpark for lunch. 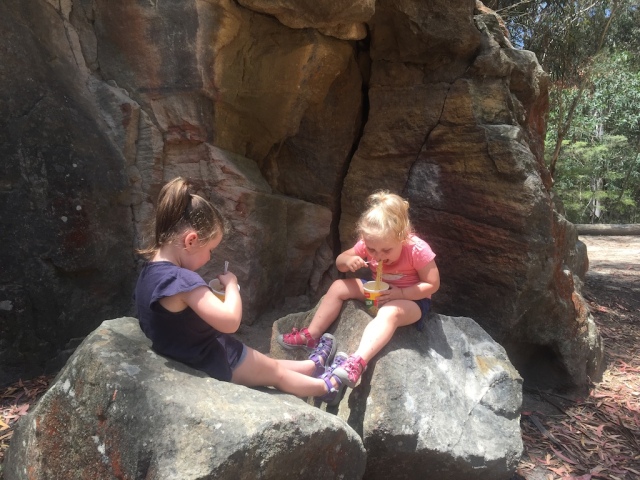 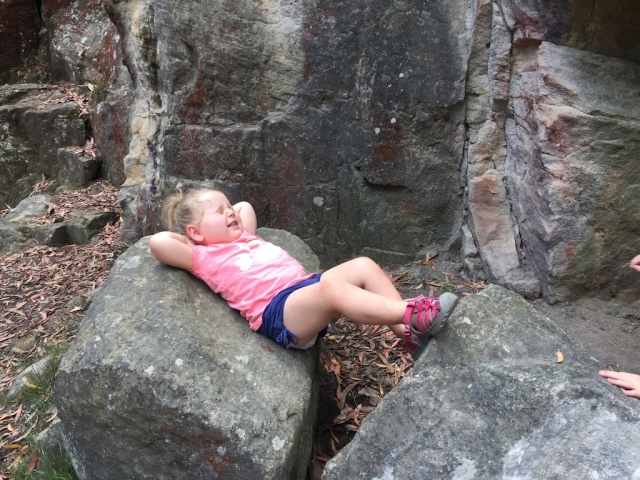 And then we headed back to camp.

And that pretty much sums up our time in the Blue Mountains. There was so much more to see. We would have loved to have explored the Jenolan Caves but when we researched it, we felt that the girls wouldn’t have really appreciated the experience and the cost to go and not be able to see some of the highlights due to the difficulty in the walking and access, meant that it went on the list for a future trip when the girls are older.

I would have also liked to have found some museum or place to find out more about my pals Blaxland, Lawson and Wentworth, but again, the girls get really bored, really quickly with that kind of stuff, so we opted to keep our experiences to the nature kind.

But it’s definitely on the future to-return-to-list!

Have you experienced the Blue Mountains? Did you ever do a project or an assignment on a topic that has still stuck with you as an adult?