Today has been a miserable old wet day.  One of those dreary days were you’re pleased to stay inside and potter around, achieving little.  After breakfast and swimming lessons, we came home so Miss A could have a nap.  Leaving Miss B to play, I thought I’d use up some of the very ripe bananas in the fruit bowl and make a banana cake.

As I have a Thermomix, , I’m all about trying new recipes and so when searching for the BEST BANANA CAKE EVER, I stumbled across an adapted Donna Hay recipe claiming to be that very thing. Well, banana bread – you say tomato I say tomato (that clearly doesn’t translate well in the written word now does it!)

Anyhoo, I got all of my ingredients together and followed the recipe to a T (kinda).

Confession number 1: Although my intention was to use up the ripe bananas, this recipe called for them to be frozen first.  Well I wasn’t going to wait until they were frozen so I took out some that I had in the freezer and traded them with the ones in the fruit bowl. Same same right?

After getting frostbitten from trying to peel the skin off frozen bananas, I whazzed them up (whazzed is official TM terminology*) and got ready to put the eggs in one at a time as instructed.  I put the first in and whazzed for 10 seconds before cracking the second egg into the TM hole in the top.

Confession number 2: After successfully adding the egg to the mix through the hole in the top whilst the TM was whazzing, I had a case of the butter-fingers and dropped an eggshell.  Sadly, I didn’t catch it in time before it fell into the rotating whirlwind of death.  There was nothing I could do, no option for recovery, so I resigned myself to the fact that I would have to … continue on and pretend like it never happened and worry about the consequences once the baked good was going into my mouth.

I continued on and finished as per the instructions, threw some walnuts on top which weren’t a part of the recipe, but hopefully would create a crunchy cover before putting it all into the oven: 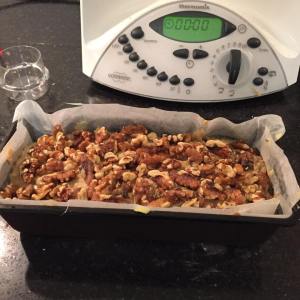 And the result.  Well, aside from looking awesome and tasting amazingly delicious, there was a distinct crunch when munching afterwards but mostly it was walnut – or perhaps I noticed it because I knew otherwise.  Either way, a few extra seconds of whazzing could have help.  But all in all, it was really just an inconvenience as opposed to being inedible.  And come on now, let’s not let things like taste and texture get in the way of a good looking cake. Because on Instagram and Twitter, it looked fabulous.  And that’s all that counts right???

But to put the cake to the test, I offered some up to my father in law and brother in law and neither of them were any the wiser. They scoffed it down without a second thought. And whilst the specks of eggshells were pretty obvious Who looks that closely at cake when they’re eating it anyway? 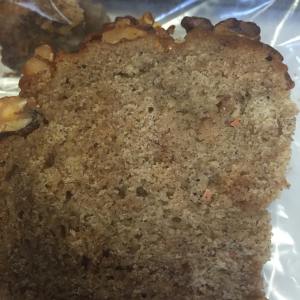 Have you ever made a baking faux pas and continued on regardless? Do you have any other brilliant Thermomix recipes you care to share?

11 thoughts on “Confessions of a ‘baker’”