I don’t get to watch TV often these days, but when I do I am pretty selective and keep it down to my favourite few (Revenge anyone?). But sometimes, when I don’t want to think, I like to turn on the random reality shows as background noise and write or catch up on life.  Tonight is one of those kind of nights!

One of my favourite ‘background’ TV sessions is Tattoo Nightmares.  The premise is pretty simple.  Someone brings in their ‘tattoo nightmare’ which usually consists of a tattoo that was either done whilst the person was a) drunk, b) emotionally incapable of making a rational decision or C) peer pressured within an inch of their lives until they got some random stupid tattoo.  You know when a show has the word nightmare in the title, it’s going to be full of awesomeness and I love this show because you get to see some fabulous creativity as the artist takes a disaster and turns it into something beautiful.

But even better than that is getting to discover the background and stories of the people who come in to get the work done – it’s fascinating.  The majority of the cases that come through tell a story about how they made   silly decision and want a cover up tattoo that will represent their growth or how they have overcome adversity or hardship in their lives.  And when that tattoo artist delivers, it’s pretty spectacular!

So tonight back to back episodes have been playing and I haven’t been disappointed. Each episode showcases three very different disasters and three fabulous cover ups and tonight my favourite was the story of a guy called Hayden who came in to cover up a tramp stamp that he ‘got for a girl’ when he was younger but who was no longer in his life anymore.  After approving the new design, and just as the artist was about to begin she asked him to tell her more about why he got it for a girl.  Because you know we’re all thinking it right?  Why would you get a tramp stamp for a girlfriend???? But, the words he said next were totally unexpected but magnificent.  “You know the girl who I told you was in my life but is now no longer there” he said, “Well, that was me”.

So, of course I’ve stopped what I’m doing and am riveted. Didn’t. See. That. Coming!!!! It was so awesome to hear him talk about how it’s taken him such a long time to pass as a man after his transition that covering the tattoo will make his transition complete.  And he ended up covering that tramp stamp with an awesome 50’s style jukebox which looked amazing! You can check out the video here.

So we go from that awesome story to the more random and obscure but equally as fascinating.

Like this one… The bloke who came in because his wife was still wanting to kill him after five years for coming home a tattoo on his lower leg that had the words ‘Murder Boner’ written across an image of an ‘angry-looking’ penis holding a knife.  Yes, this man had a penis on his leg!  So the transformation from angry dick to a neon glowing Egyptian God called Anubis was of course impressive: 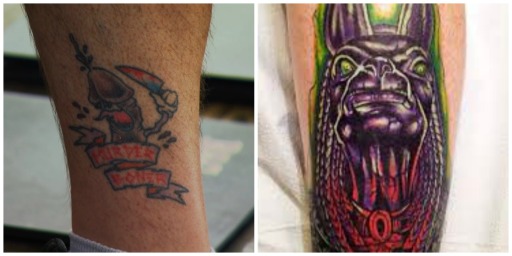 Or how about this unfortunate incident where the girl who wanted a cityscape and the letters,  “SLC, UT” (which stood for for Salt Lake City, Utah) but ended up with with a missing letter ‘C’… Have a think about that for a second… Yes, she had the word SL, UT written on the inside of her forearm.  You can’t make this stuff up.  Having just divorced her wife, she wanted a phoenix to represent her rising again.  But of course, in every episode, the tattoo artist claims these cover ups are always near impossible but they still manage to deliver! This one, was a phoenix rising from a charred city: 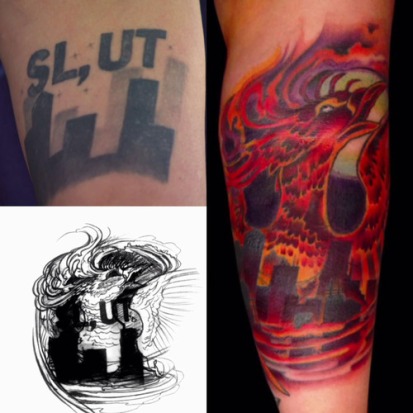 It’s not television that requires a lot of investment, that’s for sure!  But after a long day and a tough week, it’s nice to chill out and enjoy it for what it is.  And sometimes, I actually jot notes down about the people who come in or a good story that is different from the usual…. and you never know, one day I might use one of them in a book!

Do you enjoy mindless TV when you are pottering around or don’t want to concentrate? Do you have any tattoos?